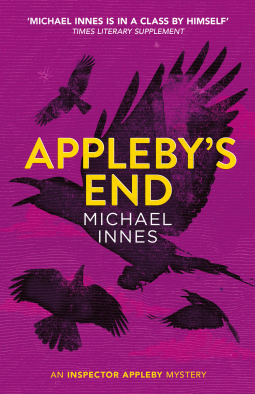 Appleby’s End was first published in 1945.

Appleby’s End was the name of the station where Detective Inspector John Appleby got off the train from Scotland Yard. But that was not the only coincidence. Everything that happened from then on related back to stories by Ranulph Raven, Victorian novelist – animals were replaced by marble effigies, someone received a tombstone telling him when he would die, and a servant was found buried up to his neck in snow, dead. Why did Ranulph Raven’s mysterious descendants make such a point of inviting Appleby to spend the night at their house?

This is 4th Inspector Appleby book I’ve read. Each one seems very different. I think Michael Innes’ writing is an acquired taste with long, meandering sentences. At times I was bored and bewildered and nearly stopped reading, but I persevered until events became clearer, which they did by the end of the book.

Scotland Yard Detective Inspector John Appleby and Everard Raven, once a barrister and now a compiler of encyclopedias, meet on a train. Appleby is travelling to Snarl and Everard to his home at Long Dream Manor where generations of the Raven family have lived. They get off the train at ‘Appleby’s End’ station and from that point on the book travels off on a perilous journey, as supernatural events foretold by one of the Raven ancestors, Ranulph Raven, come true forty years later- or do they?

Throughout the book Innes drops in literary and cultural allusions and comments on writing fiction. At one point Appleby thinks it would be ‘pleasant to retire from the elucidating of crime and give oneself to the creating of unashamed fantasies,’ and that is precisely what Innes has done in this book. Appleby’s End is surreal, a macabre fantasy with a  complex and completely unrealistic plot and strange characters, with names like Heyhoe, Rainbird, Hoobin and Scurl,who live in rural, out-of-the-way places with names such as Yatter, Sneak, Snarl, Drool, Boxer’s Bottom, and Linger. There’s been a lot of interbreeding and pig rustling. Strange things are happening, people are turned into marble, or are replaced by waxworks. There’s Mrs Ulstrop who believes she is a cow, plenty of red herrings, ‘spotlights’, needles in haystacks and tales of a ‘howling and hollering head’.

During this rigmarole of events Appleby becomes engaged to Judith Raven, Everard’s cousin and there are hints that  he will retire from the police force and become a farmer. This isn’t really a murder mystery and I didn’t like it as much as three of his earlier books that I’ve read- Death at the President’s Lodging,  The Secret Vanguard, or The Daffodil Affair. Of those three I much prefer Death at the President’s Lodging,  a ‘locked room’ mystery.

Michael Innes is the pseudonym of John Innes Mackintosh Stewart (1906 – 1994), a British scholar and novelist. He was born near Edinburgh, the son of a Scottish professor, and attended Edinburgh Academy, then Oriel College, Oxford where he won the Matthew Arnold Memorial Prize in 1939 and honours in English. He was a Lecturer, then a Professor in English at different universities, including Adelaide University in South Australia from 1935 to 1945. He became an Oxford fellow in 1949 and finished his academic career in 1973 as a Student (Fellow) at Christ Church Oxford.

My thanks to Agora (Ipso Books) for a review copy via NetGalley.