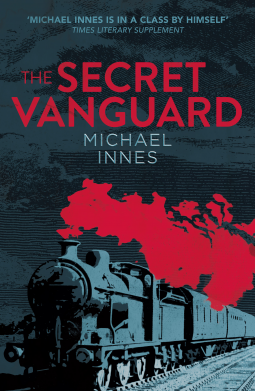 Nobody, she said to herself, is necessarily what he appears to be; nobody.

I enjoyed The Secret Vanguard very much. It’s the fifth in Michael Innes’ Inspector Appleby series and is very different from the first one Death at the President’s Lodging, which I read several years ago, a book that had little action, much description and a lot of analysis.  Set in 1939 on the edge of war, The Secret Adversary is full of action, a story of spies, kidnapping and a race through the Scottish Highlands to save a scientist. It reminded me in the Highlands section of John Buchan’s The Thirty-Nine Steps.

It begins with the murder of poet, Philip Ploss at his home in the Chilterns and Appleby is mystified wondering why anyone would have wanted to kill him. He had been shot in the middle of his forehead whilst in a gazebo with a magnificent view of the surrounding countryside.

It then moves to Sheila Grant, travelling by train to Scotland when she overhears a conversation about poetry as one of the passengers quotes from a poem by Swinburne. She thinks it is odd that he had added in four lines of his own and realises that the words were a sort of code that he was passing on. And, indeed this discovery leads her into danger but before she can alert anyone else she is captured and held prisoner, eventually escaping in a desperate search for assistance.

I liked all the twists and turns in this somewhat improbable story as Sheila, with much courage and luck scrapes through several dangerous escapades until Appleby comes to the rescue. I enjoyed the descriptions both of London and the Highlands as I raced through this book. I also really like Innes’ writing style, detailed, formal and scattered with frequent literary allusions and quotations. He has packed a lot into The Secret Vanguard.

My thanks to Ipso Books for a review copy via NetGalley.

5 thoughts on “The Secret Vanguard by Michael Innes”