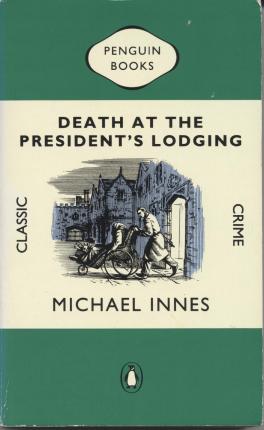 This is the first Inspector Appleby mystery by Michael Innes. What struck me most about Death at the President’s Lodging is that it is essentially a ‘locked room’ mystery. Dr Umpleby, the unpopular president of St Anthony’s College (a fictional college similar to an Oxford college)  is found in his study, shot through the head.

The crime was at once intriguing and bizarre, efficient and theatrical. It was efficient because nobody knew who had committed it. And it was theatrical because of a macabre and necessary act of fantasy with which the criminal, it was quickly rumoured, had accompanied his deed. (page 1)

Inspector Appleby from Scotland Yard is in charge of the investigation, helped by Inspector Dodd from the local police force. They provide an interesting contrast, both in appearance, age and methods. Appleby is an intellectual, contemplative, preferring to study human nature rather than rely on the use of finger prints and material evidence. Dodd is reliant on routine and although untrained and unspecialised is shrewd and thorough. They know each other and make a good pair. This passage sums up their working relationship:

And now Dodd for all his fifteen stone and an uncommon tiredness (he had been working on the case since early morning), sprang up with decent cordiality to welcome his colleague. ‘The detective arrives,’ he said with a deep chuckle when greetings had been exchanged, ‘and the village policeman hands over the body with all the misunderstood clues to date.’ (page 5)

What follows is an extremely convoluted and complex investigation of the strange crime. Without the plan at the beginning of the book I would have been lost. The college is divided into different areas and each area is locked each evening, shutting it off from the outside world and shutting one part of the college off from the rest. Dodd describes it as a ‘submarine within a submarine’. The questions are how did the murderer get in and out, who had keys, and why was Umpleby murdered?

Appleby and Dodd interview the Fellows of the College, each of whom it seems at first could have had reason to murder Umpleby. Who is telling the truth? I couldn’t tell and there are innumerable clues to mystify both the police and the reader. Appleby watches and listens, recognising that he is not going to get a quick result in such a complicated case. Of course, in the end he works it all out. He gathers together the Fellows and calls on a number of them to give their statements of the facts as they know them. They each suspect a different person as the culprit, but Appleby gradually eliminates the suspects to reveal the murderer.

It was masterly. It’s also a book that you can’t read quickly. It requires concentration. There is little action, much description and a lot of analysis. I enjoyed it very much, but after reading it I felt my brain needed a little rest.

I also wrote about Michael Innes in my Crime Fiction Alphabet series of posts – I is for Innes.

5 thoughts on “Death at the President’s Lodging by Michael Innes: a Book Review”