‘A hodge-podge of fantasy and harumscarum adventure’ 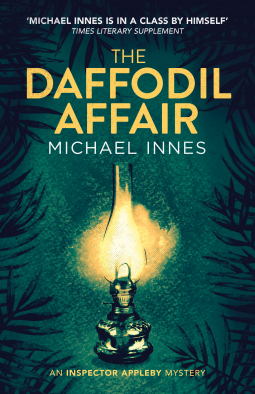 The Daffodil Affair was first published in 1942.

Light after light goes out, including two luminaries from Scotland Yard.

In the midst of the Blitz, a house in Bloomsbury disappears. In York and London, two young girls have been kidnapped. And in Harrogate, a cab horse named Daffodil has gone missing.

Appleby is sent to look into the Daffodil affair, while vice detective Hudspith investigates the cases of human trafficking. But they must work in tandem to piece this mystery together. And they soon find that the links among the disappearances are odder than they could possibly imagine: the house is haunted, one is girl a witch, the other has multiple personalities, and the horse can count. Whoever is behind this is trafficking in marvels.

Appleby and Hudspith pursue their victims deep into the South American jungle where they discover the terrifying sprawl of this bizarre vision. Surrounded by rivers filled with alligators and the swirling mist of the Amazon, the pair are confronted with questions of magic and the supernatural. But when the madman’s machinations turn to the two police officers, Appleby must race against the clock to stop this weird experiment before it costs him his life.

Master mystery writer, Michael Innes, turns his hand to an adventure tale, and sends his Inspector Appleby to the exotic jungle of the Amazon.

This is the 8th Inspector Appleby book and the 3rd one I’ve read. Each one seems very different. This one is pure escapism and I think Michael Innes must have enjoyed himself immensely whilst writing it. It’s full of literary allusions and quotations and has a completely unrealistic plot. I think his writing is an acquired taste with long, meandering sentences, and formal language, including many unfamiliar words to me that I wasn’t sure of their meaning.

But I enjoyed reading it, once I’d come to terms with Innes’ style –  and the crazy plot. I enjoyed spotting many of the literary references, although I probably missed as many as I recognised. There are allusions to Wordsworth’s poem Daffodils, to Moby Dick, Ulysses, Doctor Jekyll and Mr Hyde, Shelley, Dr Johnson, Australian Aboriginal mythology, Browning, Yeats and Shakespeare amongst others. And in the South American jungle with its alligator–infested rivers, their ‘plop’,’plop’ as they disposed of Mr Wine’s victims reminded me of the crocodile in Peter Pan. The characters’ unlikely names, such as Mr Wine – Mrs Nurse, a high-class medium, seemingly nice, honest and capable, the enigmatic Miss Mood, with her ethereal, gibberish talk, husky and glamorous and Mr Beaglehole, Mr Wine’s secretary, whose name is a corrupt form of Bogle Hole, Scots for the lair of the demon, who lures his victims in, all contribute to this allegorical tale.

I particularly like his thoughts about detective stories, referring to them as stories that take one out of oneself, and as Hudspith  tells Appleby they are in ‘a sort of hodge-podge of fantasy and harumscarum adventure that isn’t a proper detective story at all. We might be by Michael Innes.’ ‘Innes? I’ve never heard of him.’ Appleby spoke with decided exasperation.’

Throughout the book Innes drops in his thoughts on a variety of topics including philosophy, the nature of evil, witchcraft, paranormal manifestations,  telepathy, superstition versus scientific inquiry, and multiple personalities. The arch-villain, Mr Wine, is a madman attempting to conquer the world with his physic circus of mediums through superstition and the supernatural.

I wasn’t at all sure where this book was taking me. It’s more a book of suspense than a detective story. There is nothing straight forward about it; it’s richly descriptive and surreal as it proceeds from one absurd situation to the next, but with serious undertones. It predicts that under such a madman as Mr Wine weird fantasies would spread, and sub-rational deceits and mumbo-jumbo would put power in the hands of whoever had control of a vast and efficient organization.

The ending of the book continues the fantastical aspects of this book and as Hudspith considers how they can escape from Wine and his gang he concludes that their only hope is for a ‘deus ex machina to wind everything up happily after all.’ And that is precisely what Innes provided.

Michael Innes is the pseudonym of John Innes Mackintosh Stewart (1906 – 1994), a British scholar and novelist. He was born near Edinburgh, the son of a Scottish professor, and attended Edinburgh Academy, then Oriel College, Oxford where he won the Matthew Arnold Memorial Prize in 1939 and honours in English. He was a Lecturer, then a Professor in English at different universities, including Adelaide University in South Australia from 1935 to 1945. He became an Oxford fellow in 1949 and finished his academic career in 1973 as a Student (Fellow) at Christ Church Oxford.

My thanks to Ipso Books for a review copy via NetGalley.

4 thoughts on “The Daffodil Affair by Michael Innes”