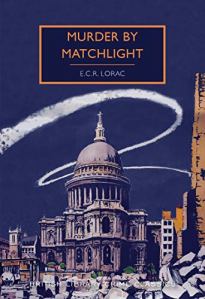 Murder by Matchlight was first published in 1945 by Collins Crime Club. This edition, published in association with the British Library, has an introduction by Martin Edwards. It’s the 25th book featuring Chief Inspector Robert Macdonald, a shrewd detective, not easily ruffled or fooled.

London. 1945. The capital is shrouded in the darkness of the blackout, and mystery abounds in the parks after dusk.

During a stroll through Regents Park, Bruce Mallaig witnesses two men acting suspiciously around a footbridge. In a matter of moments, one of them has been murdered; Mallaig’s view of the assailant but a brief glimpse of a ghastly face in the glow of a struck match.

The murderer’s noiseless approach and escape seems to defy all logic, and even the victim’s identity is quickly thrown into uncertainty. Lorac’s shrewd yet personable C.I.D. man MacDonald must set to work once again to unravel this near-impossible mystery.

E C R Lorac was a pen name of Edith Caroline Rivett (1894-1958) who was a prolific writer of crime fiction from the 1930s to the 1950s, and a member of the prestigious Detection Club. She formed her pseudonym by using her initials and for the surname, the first part of her middle name spelled backwards. She also wrote under the name of Carol Carnac.

I thoroughly enjoyed Murder by Matchlight.  I’ve read two  other books by E C R Lorac, Bats in the Belfry and Fire in the Thatch, both of which I enjoyed, but I think this is my favourite of the three.

The setting is London in 1945, in the darkness of the blackout as the bombs are still falling. A murder takes place in almost complete darkness in Regent’s Park, witnessed by Bruce Mallaig who heard it happen and briefly saw both the victim and his assailant by the light of a struck match. It is not only darkness that shrouds the mystery – who is the victim? He carried an identity card, but it seems it was not his – so who is he and who is the other man Bruce glimpsed on the bridge, a ‘dark flushed heavy-jowled chap’? In addition there are two other witnesses – a man standing below the bridge and a doctor who was walking his dog in the park and heard the noise and came to see what had happened. Chief Inspector Robert Macdonald is put in charge of the investigation.

The victim’s address on the identity card he carried was a house in Notting Hill Gate that had been divided into six self-contained flats, with a resident caretaker. The other tenants were colourful characters mostly variety performers, including Mr and Mrs Rameses who were conjurers and illusionists. None of them knew much about the victim, who appeared to have been a loner, with no friends or family and when the police searched his room they couldn’t find anything to help identify him. So, the police have to rely on the witness statements, checking alibis and a reconstruction of the crime scene.

Murder by Matchlight has a tightly constructed and intricate plot, full of twists and turns and red herrings before Macdonald can ease out all the strands to discover the identity of the murderer and the culprit’s motivation. It is a quick read, but I didn’t find it easy to work out the solution. One of Lorac’s strengths is her descriptive writing and in this book I was struck by the detail it gives of life during the Second World War for the people at home, their spirit despite the destruction and at the same time the opportunities for crime the blackout provided.