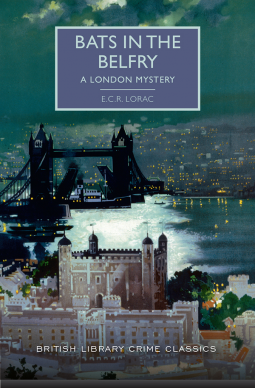 This was first published in 1937 by Collins Crime Club. This edition has an introduction by Martin Edwards.

Bruce Attleton dazzled London’s literary scene with his first two novels – but his early promise did not bear fruit. His wife Sybilla is a glittering actress, unforgiving of Bruce’s failure, and the couple lead separate lives in their house at Regent’s Park.

When Bruce is called away on a sudden trip to Paris, he vanishes completely – until his suitcase and passport are found in a sinister artist’s studio, the Belfry, in a crumbling house in Notting Hill. Inspector Macdonald must uncover Bruce’s secrets, and find out the identity of his mysterious blackmailer.

This intricate mystery from a classic writer is set in a superbly evoked London of the 1930s.

E C R Lorac was a pen name of Edith Caroline Rivett (1894-1958) who was a prolific writer of crime fiction from the 1930s to the 1950s, and a member of the prestigious Detection Club. Little has been written about her life. By the time of her death she had produced more that seventy books but she seems to have been a forgotten author and I hadn’t heard of E C R Lorac until quite recently.

I’m pleased to say that I enjoyed Bats in the Belfry, which is set in London in the 1930s. There is the occasional anti-Semitic comment, offensive now but it seems to reflect the period in which Lorac was writing. However, it’s full of descriptive writing painting vivid pictures of the streets of London and in particular the spooky, Gothic tower in which a corpse is discovered, ‘headless and handless‘. For a while the identity of the murdered man is in doubt – is it that of Bruce Attleton who had unaccountably disappeared or that of the mysterious stranger, Debrette who it seems had been blackmailing Bruce?

Chief Inspector Macdonald of New Scotland Yard is called in to investigate Bruce’s disappearance. I liked Macdonald, a ‘long lean faced’ Scot. He’s a shrewd detective, not easily ruffled or fooled. The other characters are well defined, including Bruce’s wife Sybilla, both of whom are having affairs, and his friends, one of whom, Robert Grenville, is in love with his ward Elizabeth, a lively and resourceful young woman.   The plot is complex, with enough twists and turns to keep me guessing until very nearly the end of the book.

I think this is one of the better Golden Age Mysteries that I have read, and I’m now looking forward to reading another of her books, Fire in the Thatch, set in Devon.