Our garden is visited by many birds and each year we’ve enjoyed watching them on the bird feeders. House martins have nested in the gable ends of the house and given us splendid aerial displays. Pheasants are regular visitors, Other birds have also made nests, some in bird boxes and this year we got a new blue tit box – one with a camera and waited to see whether it would be occupied.

We were lucky, as one blue tit spotted it and she started to occupy it, flying in and out and pecking the edges of the hole. For a while she was on her own. She spent quite a lot of time knocking with her beak on the walls of the box and then a male came flying in and joined her hopping around the box to inspect it. They looked so funny as their feet skidded on the smooth floor of the box, but then they began to bring in bits of plant material, scattering it around, then re-arranging it haphazardly. And then they removed all of it and I thought they’d decided to go elsewhere – but no, they came back and more material appeared and then they took it all out. This went on for a while.

I wondered if this was normal and decided I needed to find out more about their nesting habits. After checking several bird websites, I found this little book – Blue Tits in My Nest Box by David Gains, a mine of information.

And I was relieved to read that this was exactly what the blue tits in his bird box did too. I breathed a sigh of relief and waited to see what would happen next. It’s the female that does most of the nest building And she kept on bringing in more plant material and feathers, tossing it all around, then sitting in the middle of the mass, holding out her wings and shuffling round and round, she made a hollow with her body.

This doesn’t look like the nests you see on TV wildlife programmes, but eventually she was satisfied with it and laid her eggs. We were so excited as one by one five little featherless chicks hatched. Sadly one of them died and we had to remove it from the nest. In the photo below you can see their open mouths as they waved the heads around when the adult birds came in to feed them. The fourth bird was smaller than the others – you can just see its little mouth behind the others. I’m sure it didn’t get as much as the others as they jumped on top of it to get fed!

As they got bigger they began to flatten the nest, jumping up and down, trying out their wings. Eventually the day came when one by one they left the nest until there was just the smallest one left. It kept trying to jump up to the hole and I didn’t think it was big enough to survive outside, but it made it. And we next saw them in the garden on the bird feeders and trees, fluttering their wings and opening their beaks as the parents continued to feed them.

I began writing this post earlier this year when the blue tits were hatching and never finished it. I spent so much time watching what was going on in the nest I got so behind with everything. It was fascinating.

There is a little wood at one end of our garden with a stream running through it.

And over the other side of the little stream there are several old trees and decaying tree stumps.

It’s rather overgrown across the stream, ideal for wildlife.

The rabbits have made a path at the side of the tree up to a grassed area where Heidi, our cat, sits for hours on rabbit watch waiting for them to come out and play. Unfortunately her ‘play’ is a little rough for the baby rabbits and we have had to rescue a couple. 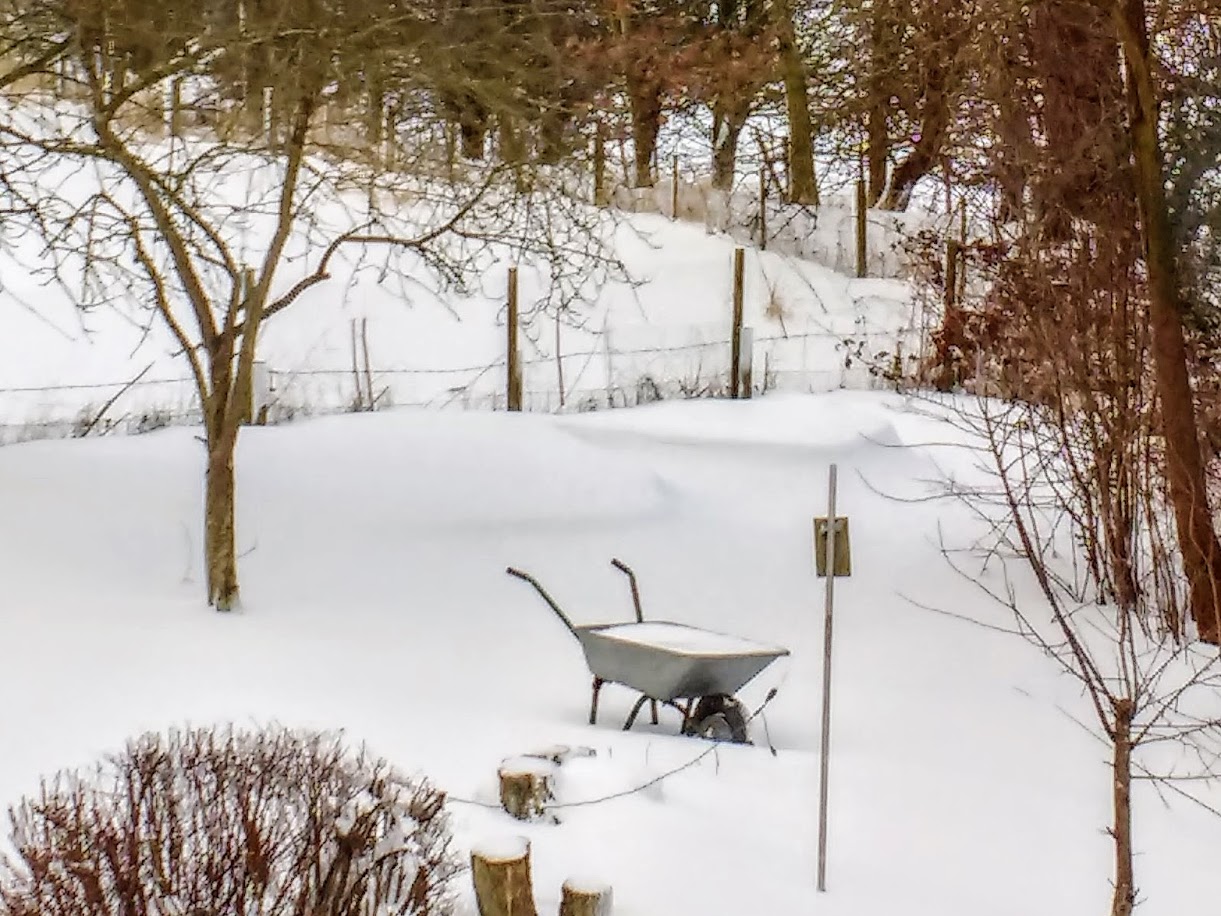 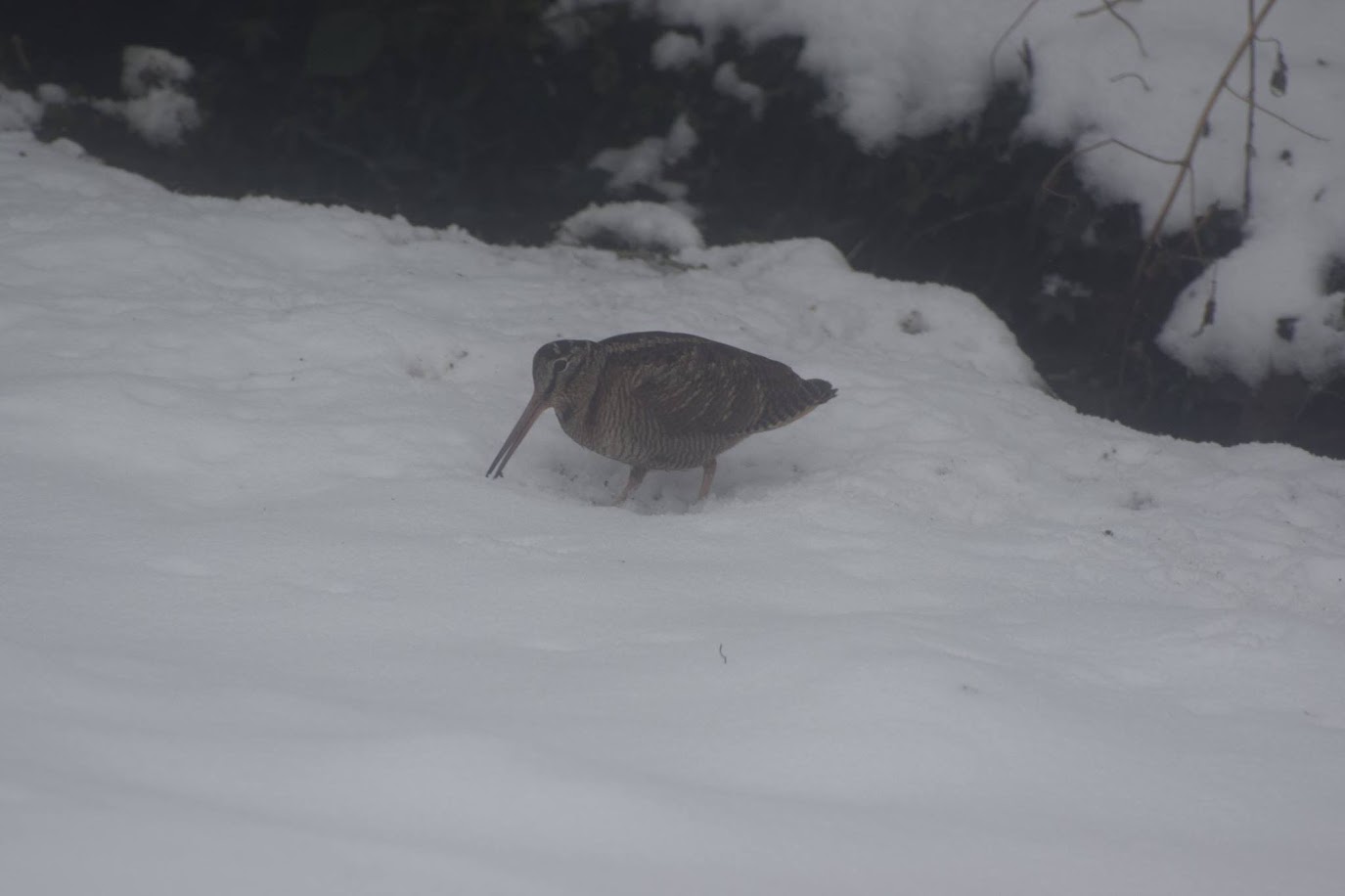 These are the latest library books I have out on loan, borrowed from the mobile library that visited here on Tuesday. I didn’t have any authors or titles in mind but browsed the shelves, choosing each one purely on instinct – hoping I’d like each one:

Garden Friends by Ed Ikin. This is a beautiful little book subtitled, Plants, animals and wildlife that are good for your garden. It’s full of information and photos and drawings, with chapters on plants, animal and insects that can help improve your garden, on dead wood, composting and planting by the moon – apparently there is ‘more than just hippy wisdom behind paying heed to the moon and its potential influence over your garden and wildlife.‘

Circle of Shadows by Imogen Robertson – historical fiction set in Germany in 1783. I haven’t read any her books before and as this is the third book in her series of books featuring Harriet Westerman and Gabriel Crowther, I’m hoping it won’t matter that I haven’t read the earlier books. The two English sleuths investigate the murder of Lady Martenson at a masked ball. There’s alchemy involved and automata – mirroring the luxury and artificiality of the German court.

Caleb’s Crossing by Geraldine Brooks. I’m a fan of her books so I have great hopes for this one. It’s inspired by a true story, but is a work of imagination. Set in the island now known as Martha’s Vineyard in the 1650s this is the story of Caleb, the son of a Wampanoag chieftain, who ‘crosses’ into the culture of the English settlers.

The Prince and the Pilgrim by Mary Stewart. This is a companion book to her Merlin trilogy, but I’m not too sure that I’ll enjoy this one as much. It’s not about Merlin and Arthur. Instead we have Alexander, nephew of King March of Cornwall seeking to avenge his father on a journey to Camelot in quest of justice. It leads him to the Dark Tower of the sorceress of Morgan le Fay.

The Long Way Home by Louise Penny. I hesitated before deciding to borrow this book, because it’s the 10th Chief Inspector Gamache novel – and I haven’t read any of the previous books. But I know that several bloggers love these books and I’d recently read Kay’s post on the 13th book – Glass Houses – describing Louise Penny’s books  as ‘some of the best and deepest character studies I’ve ever read‘ and  ‘filled with imagination and beautiful descriptions and pathos and terror.’ So I had to bring this one home to see for myself.

Set in Quebec, Gamache’s friend Clara’s has asked him for help as her husband, Peter had not come home on the first anniversary of their separation as he had promised. Gamache uncovers a deadly trail of jealousy and deceit.

If you’ve read any of these books do let me know what you think about them. If you haven’t, are you tempted by any of them?

I’ve not had much time for blogging in the last few days as I’ve been tidying up the garden, mowing the lawn, cutting things back etc. These are the last roses of the year:

Back to books tomorrow.

It was just a touch of snow that fell over night and has nearly all melted now!

Last Saturday I posted a photo of the little Japanese Maple still bearing its flame red leaves. We’ve had some high winds this week and this is what it looks like today – what a difference a week makes!

Just a few leaves are still clinging to its branches:

The rest are on the ground or have blown away.

Autumn in the garden:

The leaves are falling from some of the trees now, but our little Japanese Maple is still bearing its flame-coloured leaves.

The Wych Elm leaves are a glorious golden colour.

And in our little wood the ground is now a carpet of rustling brown leaves.

Finally, here’s D up a ladder doing repairs to the roof – I had to watch because falling leaves are one thing …

It’s been wet this week – too wet to do much gardening. This has encouraged the Ink Caps to grow. They seemed to spring up over night.

It first appears as just a small white mushroom which then grows into a cylinder with a pretty black frill:

But it soon opens out:

and eventually, having released its spores it looks like this, and then it dissolves:

It’s also known as Lawyer’s Wig and Shaggy Mane. Apparently, it is edible, but I don’t fancy eating it.

I’ve been spending more time in the garden recently and so have had less time to write on my blog. The garden has definitely been looking as though it needs tidying, deadheading and cutting back to do, and weeds are getting on top of everything!

So when the weather hasn’t been too wet I’ve been out there with my secateurs, garden fork and my dumper truck, cutting, digging and pulling up weeds – nettles, bindweed, ground elder, creeping buttercups, and other weeds whose names I don’t know.

The dumper truck is one of the best things we’ve bought recently and it has made collecting and moving weeds so much easier. Here it is empty:

and here it is full:

These weeds all have strong roots (don’t I know it!) and spread enormously with long, white runners forming a dense network. If you simply break them off they regenerate (I know that too!!). Even though I tried to get rid of these in the spring, they are still in the ground.

The nettles are difficult to tackle earlier in the year when their stings are so painful and they’re growing next to, behind, and in between rose bushes with particularly sharp thorns. What makes it worse is that their roots are the other side of the fence. At this time of year the effect of their sting is only minor and soon disappears and I managed to get at them better.

I hate bindweed – it chokes everything within its reach. I read in Richard Mabey’s book Weeds that the vernacular name for bindweed is ‘Devil’s guts’ – how appropriate.

I think I shall have to resort to weedkiller!

BooksPlease is affiliated to the Amazon EU Associates Programme. So, as an Amazon Associate I earn from qualifying purchases.
BooksPlease
Blog at WordPress.com.
Loading Comments...