Today I’m linking up with Davida @ The Chocolate Lady’s Book Review Blog for Throwback Thursday. It takes place on the Thursday before the first Saturday of every month (i.e., the Thursday before the monthly #6Degrees post). The idea is to highlight one of your previously published book reviews and then link back to Davida’s blog.

The Last Enchantment by Mary Stewart is the third book of the Arthurian Saga, a book of myth and legend and about the conflict between good and evil. I first reviewed it on April 5, 2014.

These are the latest library books I have out on loan, borrowed from the mobile library that visited here on Tuesday. I didn’t have any authors or titles in mind but browsed the shelves, choosing each one purely on instinct – hoping I’d like each one:

Garden Friends by Ed Ikin. This is a beautiful little book subtitled, Plants, animals and wildlife that are good for your garden. It’s full of information and photos and drawings, with chapters on plants, animal and insects that can help improve your garden, on dead wood, composting and planting by the moon – apparently there is ‘more than just hippy wisdom behind paying heed to the moon and its potential influence over your garden and wildlife.‘

Circle of Shadows by Imogen Robertson – historical fiction set in Germany in 1783. I haven’t read any her books before and as this is the third book in her series of books featuring Harriet Westerman and Gabriel Crowther, I’m hoping it won’t matter that I haven’t read the earlier books. The two English sleuths investigate the murder of Lady Martenson at a masked ball. There’s alchemy involved and automata – mirroring the luxury and artificiality of the German court.

Caleb’s Crossing by Geraldine Brooks. I’m a fan of her books so I have great hopes for this one. It’s inspired by a true story, but is a work of imagination. Set in the island now known as Martha’s Vineyard in the 1650s this is the story of Caleb, the son of a Wampanoag chieftain, who ‘crosses’ into the culture of the English settlers.

The Prince and the Pilgrim by Mary Stewart. This is a companion book to her Merlin trilogy, but I’m not too sure that I’ll enjoy this one as much. It’s not about Merlin and Arthur. Instead we have Alexander, nephew of King March of Cornwall seeking to avenge his father on a journey to Camelot in quest of justice. It leads him to the Dark Tower of the sorceress of Morgan le Fay.

The Long Way Home by Louise Penny. I hesitated before deciding to borrow this book, because it’s the 10th Chief Inspector Gamache novel – and I haven’t read any of the previous books. But I know that several bloggers love these books and I’d recently read Kay’s post on the 13th book – Glass Houses – describing Louise Penny’s books  as ‘some of the best and deepest character studies I’ve ever read‘ and  ‘filled with imagination and beautiful descriptions and pathos and terror.’ So I had to bring this one home to see for myself.

Set in Quebec, Gamache’s friend Clara’s has asked him for help as her husband, Peter had not come home on the first anniversary of their separation as he had promised. Gamache uncovers a deadly trail of jealousy and deceit.

If you’ve read any of these books do let me know what you think about them. If you haven’t, are you tempted by any of them? 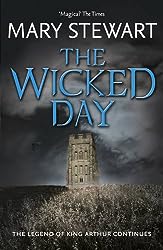 Magic is the door through which mortal man may sometimes step, to find the gates in the hollow hills, and let himself through into the halls of the other world. (The Last Enchantment, page 121)

I’ve been fascinated with the legend of King Arthur from childhood, the tales of the Sword in the Stone, the Knights of the Round Table, the Lady of the Lake, and of Merlin and so on. The Last Enchantment is the third book of the Arthurian Saga, a book of myth and legend and about the conflict between good and evil. 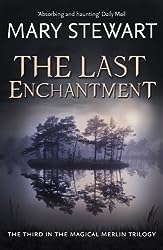 The narrator is Merlin and this book is set after Arthur has become the High King of Brtian, he has drawn the sword, Caliburn (Excaliber) from the stone and he is now plunged into battle against the Saxons , whilst Merlin is in a battle of a different kind, against Arthur’s half-sister, Morgause, the rose-gold witch. Merlin is now getting older and although he is losing his powers, they have not totally deserted him.

In fact this is a story of power, peopled by many richly depicted characters from Bedwyr, Arthur’s companion, who takes the place of Lancelot in this book, to Nimue (Niniane, Vivien), Merlin’s pupil who Merlin initiates into his magic powers. There is the story of Mordred’s birth (his mother Morgause had seduced Arthur), of Guinevere and her rape by King Melwas, and Merlin’s illness and recovery in the wild forest, and his incarceration in the Crystal Cave.

Above all, it is about Merlin and his relationship with Arthur and towards the end of the book with Niniane. As it narrated through Merlin’s eyes the battles that followed Arthur’s acsension are not the main focus of the book. He travels around the country and there is a helpful map on the endpapers of my hardback copy showing the routes he took and the places he visited. 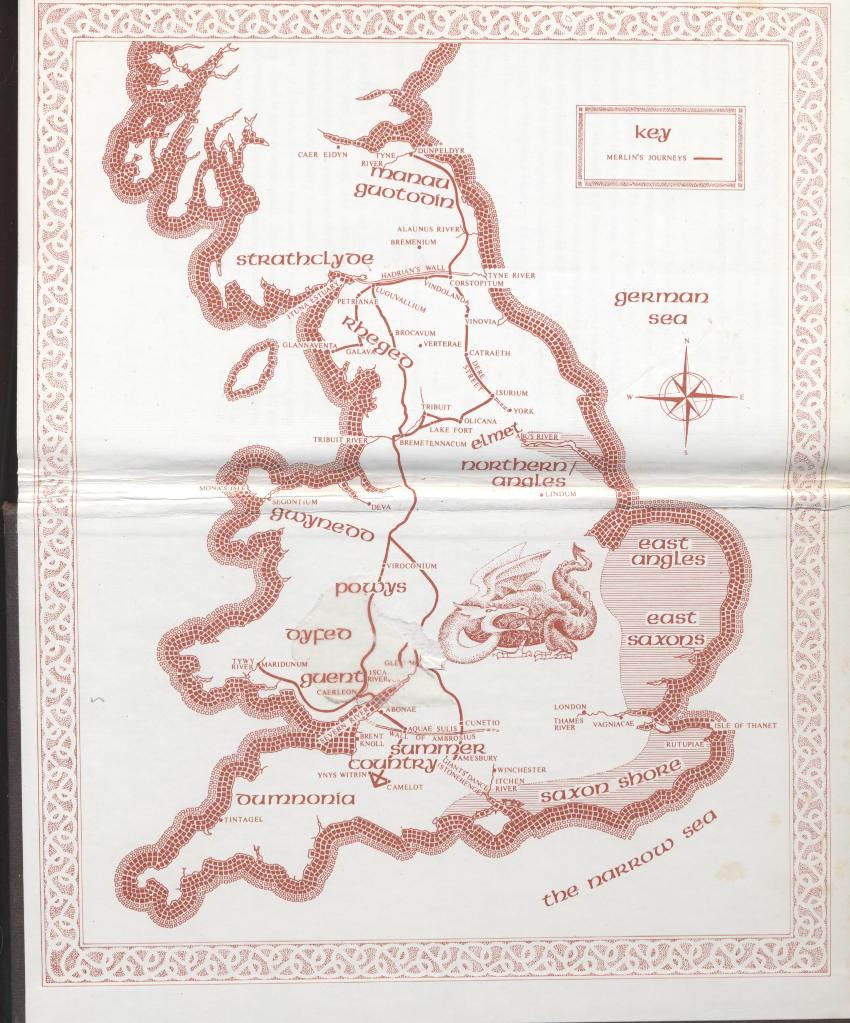 (I spent quite some time studying the map and working out what the places are called today.)

Merlin’s travels took him to numerous places including Dunpeldyr in the north-east, possibly on the site of the hill-fort on the present day Traprain Law, not far from Haddington and Dunbar, now in Scotland, then part of Northumbria; Caerleon (now the northern outskirts of Newport in South Wales); Galava (near present day Ambleside in the Lake District; and Vindolanda on the Great Wall of the Emperor Hadrian, where he visits his friend Blaise, to name but a few. It tells of how Merlin built Camelot on the hill then known as Caer Camel (caer is Welsh for fort or castle), a fictional place on a flat topped hill, not far from the sea and the Lake with its Isle of Glass.

Many years ago I read the first two books, The Crystal Cave (1970), about Merlin’s early days and The Hollow Hills (1973), in which Arthur learns who he is and becomes King.  I’d borrowed the books from the library, but never read the third book, so I was really happy when I found it in a library sale a few years ago for just 10p. I can’t think why I’ve not read it until this year, just too many other books clamouring to be read all at once, I expect.

Mary Stewart was born Mary Rainbow in January 1916 in County Durham. She currently lives in Scotland. On Goodreads I found this video of an interview with Mary Stewart in 1992 in which she talks about her writing and another interview with her in 1999, published by the University of Rochester. There are 2 other books following on from the Merlin Trilogy – The Wicked Day (1983), in which Mordred is the main character and The Prince and the Pilgrim (1995).