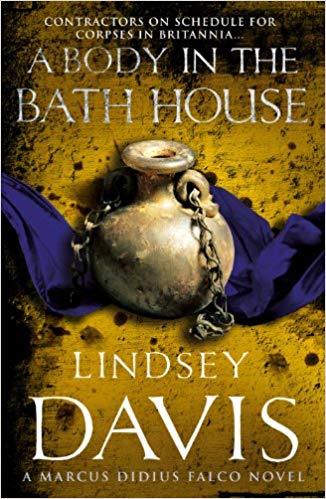 A Body in the Bath House by Lindsey Davis is one of my current library loans. It’s historical crime fiction, a Marcus Didius Falco novel, an ‘informer with a nose for trouble’.

But for Rhea Favonia, we might have lived there.

‘There’s a smell! There’s a horrible smell. I’m not going in there!’

I didn’t need to be an informer to know we were stuck. When a four-year-old girl reckons she has detected something nasty, you just give in and look for it.

‘Imagine Britain as a rough triangle.’ Helena had a letter in her hand, so well studied she hardly referred to it. ‘We are going to the middle of the long south coast. Elsewhere there are high chalk cliffs, but this area has a gentle coastline with safe anchorages in inlets. There are some streams and marshland but also wooded places for hunting and enough good farming land to attract settlers. The tribes have come down from their hillforts peacefully here. Noviomagus Regnensis – the New Market of the Kingdom Tribes – is a small town on the modern model.’

Noviomagus Regnensis was the Roman town which is today called Chichester, in the modern English county of West Sussex.

AD 75. As a passion for home improvement sweeps through the Roman Empire, Falco struggles to deal with a pair of terrible bath-house contractors who have been causing him misery for months. Far away in Britain, King Togidubnus of the Atrebates tribe is planning his own makeover. His huge new residence (known to us as Fishbourne Palace) will be spectacular – but the sensational refurbishment is beset by ‘accidents’. The frugal Emperor Vespasian is paying for all this; he wants someone to investigate.

Falco has a new baby, a new house, and he hates Britain. But his feud with Anacrites the Chief Spy has now reached a dangerous level, so with his own pressing reasons to leave Rome in a hurry, he accepts the task. A thousand miles from home, he starts restoring order to the chaotic building site and realises that someone with murderous intentions is now after him…

Fishbourne Roman Palace is in the village of Fishbourne, Chichester in West Sussex. The palace is the largest residential Roman building discovered in Britain, dated 75 AD, around thirty years after the Roman conquest of Britain.

5 thoughts on “My Friday Post: A Body in the Bath House by Lindsey Davis”