A Body in the Bath House by Lindsey Davis is one of my current library loans. It’s historical crime fiction, a Marcus Didius Falco novel, an ‘informer with a nose for trouble’.

But for Rhea Favonia, we might have lived there.

‘There’s a smell! There’s a horrible smell. I’m not going in there!’

I didn’t need to be an informer to know we were stuck. When a four-year-old girl reckons she has detected something nasty, you just give in and look for it.

‘Imagine Britain as a rough triangle.’ Helena had a letter in her hand, so well studied she hardly referred to it. ‘We are going to the middle of the long south coast. Elsewhere there are high chalk cliffs, but this area has a gentle coastline with safe anchorages in inlets. There are some streams and marshland but also wooded places for hunting and enough good farming land to attract settlers. The tribes have come down from their hillforts peacefully here. Noviomagus Regnensis – the New Market of the Kingdom Tribes – is a small town on the modern model.’

Noviomagus Regnensis was the Roman town which is today called Chichester, in the modern English county of West Sussex.

AD 75. As a passion for home improvement sweeps through the Roman Empire, Falco struggles to deal with a pair of terrible bath-house contractors who have been causing him misery for months. Far away in Britain, King Togidubnus of the Atrebates tribe is planning his own makeover. His huge new residence (known to us as Fishbourne Palace) will be spectacular – but the sensational refurbishment is beset by ‘accidents’. The frugal Emperor Vespasian is paying for all this; he wants someone to investigate.

Falco has a new baby, a new house, and he hates Britain. But his feud with Anacrites the Chief Spy has now reached a dangerous level, so with his own pressing reasons to leave Rome in a hurry, he accepts the task. A thousand miles from home, he starts restoring order to the chaotic building site and realises that someone with murderous intentions is now after him…

Fishbourne Roman Palace is in the village of Fishbourne, Chichester in West Sussex. The palace is the largest residential Roman building discovered in Britain, dated 75 AD, around thirty years after the Roman conquest of Britain.

The mobile library van visit was this week and I borrowed these books:

The Mystery of Princess Louise by Lucinda Hawksley, subtitled Queen Victoria’s Rebellious Daughter. On the back cover it says that this is ‘packed with intrigues, scandals and secrets’. I know very little about Princess Louise, Queen Victoria’s sixth child, so I’m keen to find out about her. From the opening page I’ve already found out she was a friend to artists, such as Dante Rossetti, James Whistler and John Millais and that she was a sculptor.

Caught Out in Cornwall by Janie Bolitho. I’ve read two of her books before. This is the seventh book in her Rose Trevelyan series of mysteries, in which she sees four year old Beth Jones being carried away from the beach at Marazion by someone she assumes is her father. But her mother insists he is a stranger.

A Body in the Bath House by Lindsey Davis the 13th book in her Marcus Didio Falco series of historical crime fiction mysteries. It’s set in Rome and Britain in AD 75. Falco is Britain and he hates it. A thousand miles from home he realises someone with murderous intentions is after him.

The Hunting Party by Lucy Foley. A while ago I kept seeing reviews of this book and wondered about reading it, so when I saw it on the library van shelves I decided to see what it’s like for myself. It’s a murder mystery set in a remote hunting lodge in the Scottish wilderness where old friends gather for New Year. The description makes me wonder if it is like In a Dark, Dark Wood by Ruth Ware about a group of friends who spend a weekend in a remote cottage and everything goes wrong. I’m not sure I’ll like it …

I think I’ll start with The Mystery of Princess Louise – a friend borrowed it before me and said it’s very good, but first I’ll have to finish The Sleepwalker by Joseph Knox, his latest instalment in the Detective Aidan Waits series.

This week I’m featuring The Silver Pigs by Lindsay Davis, a book that I started reading last night. Whilst this is a new-to-me series, The Silver Pigs was first published in 1989 and there are now 20 books in the series. Lindsey Davis also writes the Favia Alba Mystery series. She has won many literary awards, and was honorary president of the Classical Association from 1997 to 1998. 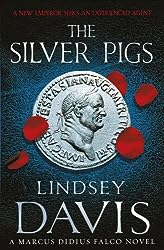 When the girl came rushing up the steps, I decided she was wearing far too many clothes.

It was late summer. Rome frizzled like a pancake on a griddleplate. People unlaced their shoes but had to keep them on; not even an elephant could cross the street unshod. People flopped on stools in shadowed doorways, bare knees apart, naked to the waist – and in the backstreets of Aventine Sector where I lived, that was just the women.

This is historical crime fiction, the first of the Marcus Didius Falco novels. Set in Rome in 70AD, Vespasian is the new Roman emperor and Falco is a private informer, or private eye. In this first book he and his partner Helena Justina rescue a young girl in trouble. He is then catapulted into a dangerous game involving stolen imperial ingots, a dark political plot and, most hazardous of all, a senator’s daughter connected to the traitors Falco has sworn to expose.

My copy has an introduction by Lindsey Davis in which she tells of how she began to write historical fiction, setting a typical private eye figure in Rome two thousand years ago. It has maps and a Dramatis Personae.