The topic this week is: Books With One Word Titles. I’m not a fan of quirky long word titles – I much prefer one word titles, brief and to the point. These are all books I’ve read – except for the last one: 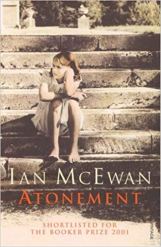 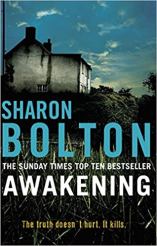 Atonement by Ian McEwan, a book I love and have read twice and seen the film.  I am often disappointed seeing the film of a book as it rarely matches the book . In this case the film is mostly faithful to the book, with minor alterations, except for the ending. I prefer the book’s ending. It’s a love story and a war novel, and also a mystery and a reflection on society and writing and writers. I loved it.

Awakening by Sharon Bolton – If you don’t like snakes this book won’t help you get over your phobia! Clare Benning is a wildlife vet who’d rather be with animals than with people. When a man dies following a suspicious snake bite she investigates his death. As more, and more snakes surface it gets really scary.  I enjoyed it immensely.

Blacklands by Belinda Bauer, her debut novel about Arnold, a serial killer and a twelve year old boy, Stephen. Nineteen years earlier Billy, Stephen’s uncle then aged eleven had disappeared. It was assumed that he had been one of  Arnold’s victims but his body had never been found. Stephen is determined to find where Arnold had buried his body and writes to him in prison.

Blonde by Joyce Carol Oates – this is a tragic story, intense and shocking in parts, a work of fiction, not a biography of Marilyn Monroe. It follows Norma Jeane Baker’s life in chronological sections from The Child 1932 – 1938 to The Afterlife 1959 – 1962. It switches from one narrator to the next, and from third person to first person perspective throughout. It’s brutal, tender and both lyrical and fragmented. I think this is one of Joyce Carol Oates best books, although I have by no means read all her books. 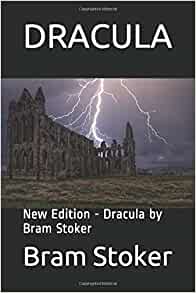 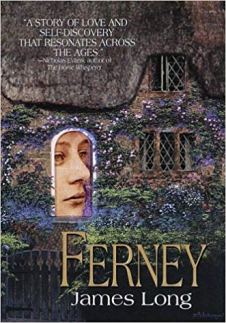 Chocolat by Joanne Harris. I saw the film first then read the book. Vianne Rocher arrives in Lansquenet-sous-Tannes, a place that is ‘no more than a blip on the fast road between Toulouse and Bordeaux’ on Shrove Tuesday. She takes over the old bakery and transforms it into La Celeste Praline Chocolaterie Artisanale – in other words the most enticing, the most delicious and sensuous Chocolaterie. It’s a fabulous book.

Dracula by Bram Stoker. I knew the story of Dracula from film and TV versions – with most notably Christopher Lee and later Louis Jourdan as Dracula, but the book surprised me – mainly by how much I enjoyed it. It is composed of letters, journal entries, newspaper articles and transcripts of phonograph diary entries, from several characters, so the story is told from several different viewpoints. And it’s a very sensual and melodramatic novel, full of religious references. There is the question of life after death, the existence of the soul, the triumph of good over evil, the nature of sexuality,  fear and superstition. Vampires are at the same time appealing and repulsive.

Ferney by James Long. This book is a love story, balancing historical fact and imagination, a sort of time-slip novel. When Gally and her husband Mike buy a derelict cottage in Somerset they meet Ferney, an old man of 80 who knows the history of the cottage.  A bond grows between Gally and Ferney but Mike is a historian and he finds it hard to believe Ferney’s stories of the past and insists on having proof. 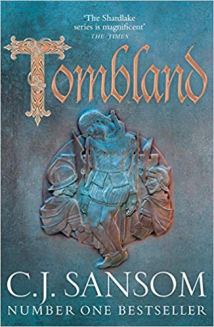 Macbeth by Jo Nesbo, a dark, gritty and violent tale that had me completely enthralled and I loved it. It’s retelling of Shakespeare’s Macbeth and I think it sticks well to Shakespeare’s version (which itself wasn’t original!) – it has the same themes and plot lines. The setting is rather vague – it is somewhere in the 1970s in a fictional Scotland in a lawless town full of drug addicts, where there is a titanic struggle for control between the police force, corrupt politicians, motorbike gangs and  drug dealers.

Tombland by C J Sansom – I could have chosen any of Sansom’s Shardlake books as they all have one word titles. Tombland is the 7th in the series, set mainly in Norwich in 1549, two years after Henry VIII’s death and England is sliding into chaos as rebellion spreads in protest against the landowners’ enclosures of the common land. It’s a murder mystery too. I loved the attention to detail and the descriptive writing which placed me precisely at the scenes.

Ulysses by James Joyce – I have started this book and given up several times. I’d love to say I’ve finished it, but I haven’t. It deals with the events of one day in Dublin, 16th June 1904, now known as “Bloomsday”. The principal characters are Stephen Dedalus, Leopold Bloom and his wife Molly. Loosely modelled on the wanderings of Homer’s Ulysses as he travelled homewards to Ithaca, Joyce’s novel follows the interwoven paths of Stephen, estranged from his father and Leopold, grieving for his dead infant son. Ulysses was made into a film, of the same title in 1967, starring Milo O’Shea as Bloom and in 2003, another version, Bloom was released starring Stephen Rea and Angeline Ball. I haven’t seen either of them – maybe I’d get on better with the book if I did watch one of them.

9 thoughts on “Top Ten Tuesday: Books with One Word Titles”