Top Ten Tuesday:  Book Titles with Numbers In Them

This week’s topic: Book Titles with Numbers In Them. I’ve read all these books and my links go to my posts about them, except for Eight Black Horses, which I didn’t write about.

One Life: My Mother’s Story by Kate Grenville – a beautiful biography of her mother Nance Russell. A book that casts light not only on Nance’s life but also on life in Australia for most of the 20th century. Nance was born in 1912 and died in 2002, so she lived through two World Wars, an economic depression and a period of great social change.

Two Moons by Jennifer Johnston – there’s a touch of magic about this book. Set in Dublin it’s the story of three women. Mimi and her daughter Grace live in a house overlooking Dublin Bay. Grace, an actress, is absorbed in rehearsals for Hamlet in which she is playing Gertrude, and Mimi, her elderly mother is similarly absorbed in talking to an angel, Bonifacio, who is invisible to everyone except Mimi. Their lives are disrupted by the arrival of Grace’s daughter, Polly who arrives to stay for a few days bringing with her, Paul, her new boyfriend.

Three Men in a Boat: (to say nothing of the dog) by Jerome K Jerome, a gentle witty book that kept me entertained all the way through. It’s about the events that happened to Jerome and his friends whilst out on the River Thames, interspersed with passages about the scenery and history. The main characters were real people, Jerome’s friends – ‘George‘ is George Wingrave who was the best man at his wedding, and ‘Harris‘ is Carl Hentschel, a photographer. Only the dog ‘Montmorency‘ is fictional. 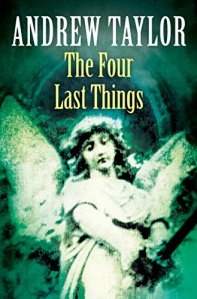 The Four Last Things by Andrew Taylor. This is the first in the Roth trilogy. The complete trilogy is about the linked histories of the Appleyards and the Byfields. The books work backwards in time, with this first book being the last chronologically, set in the 1990s, and each book works as a stand-alone, self-contained story. The Four Last Things tells the story of Lucy Appleyard, aged four, who is snatched from her child minder’s one cold winter afternoon.

Five Little Pigs by Agatha Christie – Caroline Crale was convicted of the murder of her husband, Amyas and died in prison. Sixteen years later, her daughter, a child of five at the time of the murder, asks Poirot to clear her mother’s name, convinced that she was innocent. Just like the nursery rhyme, there were five other “little pigs” who could have killed him: Philip Blake (the stockbroker), who went to market; Meredith Blake (the amateur herbalist), who stayed at home; Elsa Greer (the three-time divorcée), who had her roast beef; Cecilia Williams (the devoted governess), who had none; and Angela Warren (the disfigured sister), who cried all the way home.

The Sixth Lamentation by William Brodrick, the first Father Anselm novel. It’s historical fiction and it’s also a mystery. It looks back  to the Second World War in occupied France, telling a dramatic tale of love and betrayal, full of suspense. It weaves together fact and fiction, with accurate details of life in Paris during the Occupation and the subsequent war trials.

The Seven Sisters by Lucinda Riley, the first in the series in which Maia D’Aplièse and her five sisters gather together at their childhood home, ‘Atlantis’ – a fabulous, secluded castle situated on the shores of Lake Geneva – having been told that their beloved father, the elusive billionaire they call Pa Salt, has died. Maia and her sisters were all adopted by him as babies and, discovering he has already been buried at sea, each of them is handed a tantalising clue to their true heritage. Maia’sclue takes her across the world to a crumbling mansion in Rio de Janeiro in Brazil.

Eight Black Horses by Ed McBain. Finding a dead body was not unusual for an autumn night in the 87th Precinct. But this young woman’s body was naked—and potentially related to the series of odd missives received at the station house. All signs point to the Deaf Man’s return, this time with a plot more diabolical than even the jaded policemen could imagine. He’s been sending them mysterious pictures of police equipment: nightsticks, helmets, black horses, and more. But what did they mean?

The Nine Tailors by D L Sayers,  a Lord Peter Wimsey Mystery, first published in 1934, that had me completely baffled, first the bell-ringing, and then the twists and turns and all the red herrings. Wimsey, driving through a snow storm, ends up in a ditch near the village of Fenchurch St Paul in the Fens and is taken in for the night by the vicar. It’s New Year’s Eve (at some period in the early 1930s) and the vicar has arranged that the bell-ringers will ring in the New Year, involving 9 hours of bell-ringing. As one of the ringers is ill with influenza, Wimsey steps in at the last minute to take his place.

The Woman in Cabin 10 by Ruth Ware. Journalist Lo Blacklock takes the opportunity to fill in for her boss on a luxury press launch on a boutique cruise ship and hopes it will help her recover from a traumatic break-in at her flat. But woken in the night by a scream from cabin 10 next to hers she believes a woman was thrown over board, only to discover that the ship’s records show that cabin 10 was unoccupied. Lo is exhausted from lack of sleep, overwrought with anxiety and dependent on pills and alcohol to see her through. She fails to convince anyone that she is telling the truth.