One Life: My Mother’s Story 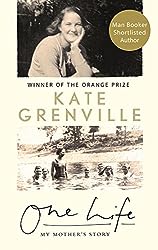 Australian author, Kate Grenville has written a beautiful biography of her mother Nance Russell. A book that casts light not only on Nance’s life but also on life in Australia for most of the 20th century. Nance was born in 1912 and died in 2002, so she lived through two World Wars, an economic depression and a period of great social change. Nance wasn’t famous, the daughter of a rural working-class couple who became pub-keepers, but she was a remarkable woman.

Kate’s mother had wanted to write her own story and had left fragments of stories about her ancestors, stories her mother had told her, about her childhood, but most about her adult life up to her mid-forties. (Kate Grenville has used some of the stories of her ancestors in her own novels – such as The Secret River, a wonderful historical novel).

So this biography reads like a novel, but is based on Nance Russell’s memories, making it much more than a factual account of a person’s life. It’s is a vivid portrait of a real woman, a woman of great strength and determination, who had had a difficult childhood, who persevered, went to University, became a pharmacist, opened her own pharmacy, brought up her children, and helped build the family home. She faced sex discrimination and had to sell her pharmacy in order to look after her children at home.

Nance had wanted to be a teacher, but when she said this to her mother she ‘exploded. Over her dead body Nance was going to be a teacher!‘  But her parents thought that pharmacy was ‘good for a girl‘. It was 40  years later, after her own children were grown up, that Nance took an arts degree, then a teaching diploma and a diploma in teaching English as a foreign language. ‘She taught French in schools, taught English to newly arrived migrant children, and ran her own business teaching English to the wives of Japanese business men.‘

My bare account of Nance’s life doesn’t do justice to this book, in which Kate Grenville brings to life both the good times and the bad times, writing about her mother’s heartache, worries, joys and sorrows, of the hard times during the economic depression, all of it as a whole making a rich and fulfilled life. Very near to the end of the book Kate Grenville writes:

One of her last trips [to Europe] was to Florence, where she stood in front of the frescoes that Dante had seen. A line came into her mind from somewhere in all her reading: Suffering pierces the shield of habit. It was a thought that made sense of the unhappiness she’d known, and also the happiness. She knew that ultimately it didn’t matter what happened to you. In the light of eternity, in the light of all those dead writers in whose work she’d recognised the great truths, only one thing mattered. What other people did was up to them. Your job was to live – as richly and honestly as you could – your one life. (page 246)

7 thoughts on “One Life: My Mother’s Story by Kate Grenville”