The Seven Sisters by Lucinda Riley is one of the books on my 20 Books of Summer list and it’s also one of my TBRs. I recently finished reading it. It’s the first book in her Seven Sisters series of books based on the legends of the Seven Sisters of the Pleiades. 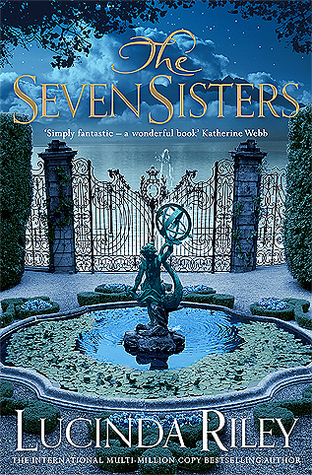 I will always remember exactly where I was and what I was doing when I heard that my father had died.

‘As a matter of fact, for Electra, she was relatively calm,’ I answered, knowing there was little love lost between my fourth and fifth sisters. Each was the antithesis of the other: Ce-Ce so practical and loath to show any emotion, and Electra so volatile.

Maia D’Aplièse and her five sisters gather together at their childhood home, ‘Atlantis’ – a fabulous, secluded castle situated on the shores of Lake Geneva – having been told that their beloved father, the elusive billionaire they call Pa Salt, has died. Maia and her sisters were all adopted by him as babies and, discovering he has already been buried at sea, each of them is handed a tantalising clue to their true heritage – a clue which takes Maia across the world to a crumbling mansion in Rio de Janeiro in Brazil. Once there, she begins to put together the pieces of where her story began . . .

Eighty years earlier, in the Belle Epoque of Rio, 1927, Izabela Bonifacio’s father has aspirations for his daughter to marry into aristocracy. Meanwhile, architect Heitor da Silva Costa is working on a statue, to be called Christ the Redeemer, and will soon travel to Paris to find the right sculptor to complete his vision. Izabela – passionate and longing to see the world – convinces her father to allow her to accompany him and his family to Europe before she is married. There, at Paul Landowski’s studio and in the heady, vibrant cafés of Montparnasse, she meets ambitious young sculptor Laurent Brouilly, and knows at once that her life will never be the same again.

I knew very little about this series when I began reading the book, but I was soon caught up in this family saga. It’s not crime fiction but there is plenty of mystery – first of all why are there only six sisters, not seven? Who was Pa Salt and why did he adopt these  girls from the four corners of the globe when they were babies? He has died before the book begins and immediately buried and, as I read a lot of crime fiction, my first thought was –  why was he adamant that as soon as he died his body was to be buried at sea, with none of the girls present? And I wondered if he had really died? Please don’t tell me the answers to my questions – I intend to read all the Seven Sisters books, when I hope all will become clear.

Pa Salt has left clues for each girl so that if they want they can discover who their parents were and the circumstances of their birth. Having introduced all the sisters Maia’s story unfolds and it is an amazing story, taking her back to Brazil, the country of her birth. It’s beautifully written and completely convincing and I raced through it eager to find out the details of Maia’s family history.

I loved all the details about the building of the statue of Christ the Redeemer on Corcovado Mountain in the Carioca Range, overlooking the city of Rio de Janeiro and how Lucinda Riley incorporated it so seamlessly into Maia’s story.

Have read this book? What did you think about it? And if you haven’t, would you keep on reading?

For more about the series see Lucinda Riley’s website, where she explains why she based the books on the legends of The Seven Sisters of the Pleiades and about the details of her extensive research for each story.

I’ll be reading the next book – The Storm Sister as soon as possible. The six books in the series are:

14 thoughts on “My Friday Post: The Seven Sisters by Lucinda Riley”