I liked the first two Maeve Kerrigan books by Jane Casey, The Burning and The Reckoning and the third, The Last Girl is just as good. I liked it mainly because Maeve is such an interesting character, and the book is fast paced and well written, with a multi-layered plot. 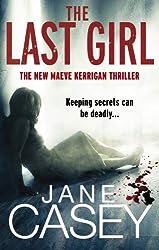 Maeve, a detective constable, is the youngest member of the Met Murder Squad investigating the murders of Vita Kennford and her daughter, Laura, age 14.  Lydia , Laura’s twin sister had found their bodies. Philip her father had walked in on the killer, received a blow to the head and was unconscious.  There are no clues at the scene of the crime and as Lydia was outside swimming at the time she neither saw nor heard anything. Philip is a defence QC known for getting his clients off even if they are guilty and at first Maeve and her boss D I Josh Derwent concentrate their investigations on people who hold a grudge against him. Any one of them seems to have good cause to have taken revenge on his family.

Unlike the earlier books, The Last Girl is narrated throughout by Maeve, so we see the events unfolding entirely through her perspective. Much of the novel centres on the Kennfords and their relationships. They are not a happy family.  Philip is an unreliable husband, regularly  unfaithful, not the sort who liked to be tied down to one woman. He is estranged from Savannah, his daughter from his first marriage. She refuses to speak to him and  Lydia seems withdrawn, reluctant to speak to anyone. Maeve is sure they are all keeping secrets.

And there is a sub-plot that harks back to the second book, The Reckoning,  as the team is also investigating a number of gangland murders. Although this book does stand well on its own I think it helps if you read them in order particularly to follow the development of  Maeve’s relationship with her boyfriend, Rob, also a policeman, now working in a different section – things between them are not going very smoothly and Maeve is having doubts. Meanwhile her working relationships with Derwent and Superintendent Godley are beginning to change as Derwent, a male chauvinist shows his softer side and she challenges Godley’s methods.

Maeve has her suspicions about the culprit, but after a while I began to think she could be  on the wrong lines as I had my doubts about the truthfulness of one particular character. And then it was fairly easy to work out who the culprit was.

I thoroughly enjoyed this book and am looking forward to the next one in the series, The Stranger You Know.

3 thoughts on “The Last Girl by Jane Casey”