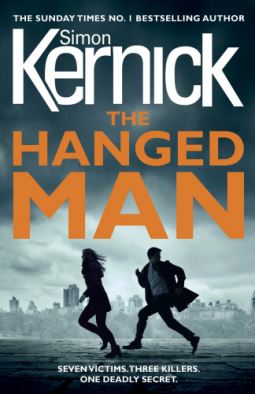 Review copy from the publishers, Random House, Century, via NetGalley

In December 2016 I read the first book in this series The Bone Field by Simon Kernick. It ended on a cliff-hanger in the last sentence (just when you thought it was all over). The Hanged Man is the second book in the series and refers back to events in The Bone Field, but in enough detail so it probably doesn’t matter much if you haven’t read the first book. It’s packed full of action right from the opening chapter as Hugh Manning and his wife are on the run from some very dangerous and violent people who are out to kill them. The police are also looking for Hugh as he is the only witness to what had happened at the farmhouse (dubbed ‘The Bone Field‘) where the bodies of seven women had been found.

Ray Mason, suspended from the police after the events told in The Bone Field, and now exonerated, is back on the case, working with Dan Watts in the National Crime Agency. The main suspects are the Kalamans,  brother and sister, Alastair and Lola Sheridan and a mysterious character called Mr Bone. It’s  told through different characters’ viewpoints, including Ray’s partner, ex-cop and now a PI, Tina Boyd. With so many characters acting as narrator it’s useful that Kernick uses the first person when telling what happens as seen through Ray’s eyes, whereas the rest are told in the third person.

It’s complicated, maybe over-complicated and I found myself racing through it. There are too many characters and sub-plots. Some characters are like cardboard cut-outs, the ‘baddies’ really bad and the ‘goodies’, particularly Ray Mason, who breaks all the rules, not much better. It’s a world full of corruption and secrets, where life is of little account and murder commonplace, and nobody is safe. But because I knew the identities of the criminals from the start there is no mystery – it’s just a matter of who will get to Manning first, the police or the villains and will the villains be caught? There’s climatic ending – but is this really the end …?