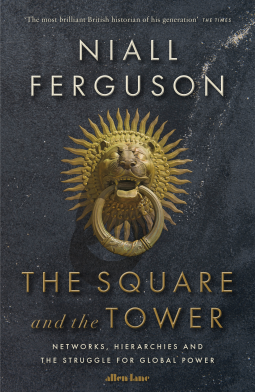 Source: review copy from the publishers via NetGalley

What if everything we thought we knew about history was wrong? From Niall Ferguson, the global bestselling author of Empire, The Ascent of Money and Civilization, this is a whole new way of imagining the world.

Most history is hierarchical: it’s about popes, presidents, and prime ministers. But what if that’s simply because they create the historical archives? What if we are missing equally powerful but less visible networks – leaving them to the conspiracy theorists, with their dreams of all-powerful Illuminati?

The twenty-first century has been hailed as the Networked Age. But in The Square and the Tower Niall Ferguson argues that social networks are nothing new. From the printers and preachers who made the Reformation to the freemasons who led the American Revolution, it was the networkers who disrupted the old order of popes and kings. Far from being novel, our era is the Second Networked Age, with the computer in the role of the printing press. Once we understand this, both the past, and the future, start to look very different indeed.

Subtitled ‘Networks, Hierarchies and the Struggle for Global Power‘, this is described as ‘a whole new way of imagining the world’ as it’s possible that we’re missing information about networks because it’s not recorded in historical archives. But what I found in this book is rather different, being a run through history in what seemed to me a disjointed way, albeit very detailed, with network diagrams and many footnotes. I found parts of it quite tedious, especially the early section detailing the research on the history of networking. If I hadn’t requested the book from NetGalley I would have not bothered reading any more. Fortunately I found some sections were more interesting (such as on such varied topics as social media, the Illuminati, the Reformation, European Royal families, the Cambridge spies, Al Qaeda, ISIS and Trump to name but a few) and I did finish the book.

Ferguson states that his book seeks to learn about the future mainly by studying the past, in particular by looking at the importance of networks in the past that had been at times very powerful. But by the end of the book I didn’t feel too enlightened in that respect as often the distinction between hierarchies and networks is blurred – there are networks that are hierarchical and hierarchies that are parts of wider networks. As Ferguson acknowledges, the dichotomy between hierarchy and network is an over-simplification.

I requested this book when I saw it on NetGalley because history is a subject that I find fascinating, and the blurb interested me. However, although there are sections that I did find interesting, mainly those written as conventional narrative history, overall I was disappointed. I think it is disjointed with sections that don’t seem to me to have much connection with the main theme, overstretching the analogy. To summarise – I don’t think such theoretical historical analysis is for me.

My thanks to the publishers and NetGalley for a review copy.