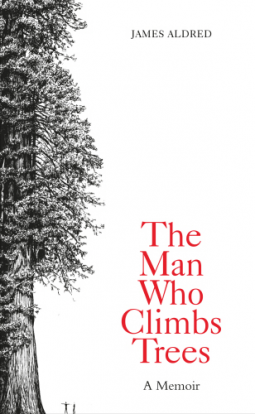 Source: e-book for review from the publishers

It was a delight to read The Man Who Climbs Trees by James Aldred. It is not only full of information but also beautifully written and absolutely fascinating. If you have ever wondered how wildlife/nature documentaries are filmed this book has the answers.

James Aldred, a professional tree climber, wildlife cameraman, and adventurer, explains how he discovered that trees are places of refuge as well as providing unique vantage points to view the world. Trees enthral him, right from the time he first climbed into the canopy of an oak tree in the New Forest. Climbing trees gives him peace within himself and with the world around him. Since he first began climbing trees he has travelled the world climbing many of the world’s tallest trees, filming for the BBC and National Geographic magazine.

It’s incredibly dangerous work. It’s not only the difficulties of climbing some of the world’s tallest trees, but also dealing with extreme weather, attacks from animals, birds and a variety of insects. Perhaps the most horrifying was a sinister rash that appeared all over his body when he was in the Congo. This rash developed into ninety red angry boils, several of them on his head. Then he was woken by something moving beneath the skin of his scalp, squirming and wriggling around; the pain was unbearable. Each boil was home to spine-covered maggots that bot-flies, large black flies with bulbous red eyes, had laid under his skin!  He ended up in hospital with cerebral malaria.

I have always loved trees but I’ll never look at them again with the same eyes after reading this book – such strange and wonderful stories of the nature and significance of trees.

The Man Who Climbs Trees is a wonderful book, full of James Aldred’s adventures and his views on life and spirituality. I loved it. His travels brought him into contact with dozens of different religions and philosophies all containing ‘profound elements of truth’ that he respects very much, concluding that ‘spirituality is where you find it’ and he finds it ‘most easily when up in the trees’.

There are no photos in this book but there are some in this article and an amazing video James took of the incredible Korowai tribe in Papua building a tree house. It’s well worth watching.

I meant to post this a couple of weeks ago – it’s that time of year when the garden seems to take over my life and this year there’s been quite a lot going on in our garden.

This is an old ash tree in the field behind our house and we’ve called it a Tree of Multiple Occupancy. It’s hollowed out at the top with several holes lower down and the occupants are mainly jackdaws and wood pigeons. This is not a happy household as none of them get on and the jackdaws regularly patrol the tree trying to scare off any birds that come near.

In the early mornings I’ve seen a barn owl going into the top hole, chased by the jackdaws. I’ve seen the owl a few times now – one evening it came sweeping out of the top hole followed by a group of jackdaws. It flew into our little wood and after just a short time it flew back into the tree. I wish I’d had my camera handy that day, it’s an absolutely beautiful bird!

I also wish I had a camera inside the tree to see the arrangements – is the tree hollow all the way down? Do they all have nests? And is the barn owl nesting there too?

The great tits and bluetits have been busy – the great tits made a nest in an old hollow fence post and produced four young ones. David’s video shows the fledglings leaving the nest early one morning. We also have had bluetits nesting in a great tits’ bird box on the gable end of the house. And now the swallows are here, swooping around the sky – such wonderful aerial displays.

Last Saturday I posted a photo of the little Japanese Maple still bearing its flame red leaves. We’ve had some high winds this week and this is what it looks like today – what a difference a week makes!

Just a few leaves are still clinging to its branches:

The rest are on the ground or have blown away.

Autumn in the garden:

The leaves are falling from some of the trees now, but our little Japanese Maple is still bearing its flame-coloured leaves.

The Wych Elm leaves are a glorious golden colour.

And in our little wood the ground is now a carpet of rustling brown leaves.

Finally, here’s D up a ladder doing repairs to the roof – I had to watch because falling leaves are one thing …

We have a wych elm in the back garden. This year it’s been absolutely full of seeds, many more than usual:

The seeds have been blowing all over the garden, covering the lawn and borders. They grow in clusters:

One got caught in a cobweb:

Here it is in close-up:

Wych Elms are hardy trees and have greater resistance to Dutch elm disease than other elms. The name ‘wych’ comes from an Anglo-Saxon word meaning pliable and refers to the tree’s twigs. Its wood has many uses, including underground water pipes (in the past), boat building and the seats of chairs – it’s also the traditional wood used for coffins.

I love trees – and they are good for you:

A garden without trees is as hard to envisage as an art gallery with pictures. Trees soften the landscape. They provide shade in the summer and protection during the winter. A screen of trees around the house can provide enough wind-shelter to reduce by a tenth the energy consumption in the home. Their canopy of leaves acts as a highly effective pollution filter, absorbing many of the major atmospheric pollution gases, including carbon monoxide, nitrogen and sulphur dioxide. Research also reveals that we are happier and more relaxed when we are in leafy surroundings … (The Therapeutic Garden by Donald Norfolk page 105)