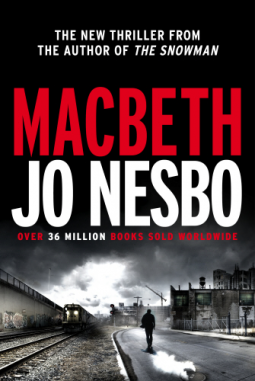 He’s the best cop they’ve got.

When a drug bust turns into a bloodbath it’s up to Inspector Macbeth and his team to clean up the mess.

He’s also an ex-drug addict with a troubled past.

He’s rewarded for his success. Power. Money. Respect. They’re all within reach.

But a man like him won’t get to the top.

Plagued by hallucinations and paranoia, Macbeth starts to unravel. He’s convinced he won’t get what is rightfully his.

Unless he kills for it.

I haven’t read any of Jo Nesbo’s books so I wasn’t sure what to expect from his version of Macbeth, translated from the Norwegian by Don Bartlett. And it’s been a long time since I read or saw a performance of Macbeth, one of my favourite plays, but it seems to me that Jo Nesbo’s retelling of Shakespeare’s Macbeth sticks well to Shakespeare’s version (which itself wasn’t original!) – it has the same themes and plot lines.

I loved the opening of Nesbo’s version describing the rain falling on an industrial town, the second largest after Capitol. The setting is rather vague – it is somewhere in the 1970s in a fictional Scotland in a lawless town full of drug addicts, where there is a titanic struggle for control between the police force, corrupt politicians, motorbike gangs and  drug dealers.

All the characters are here, including Duncan, the new police Chief Commissioner after Kenneth was killed, Malcolm his deputy, Banquo, Macbeth’s friend and his son, Fleance, Inspector Duff (Shakespeare’s Macduff, Thane of Fife), head of the Narcotics Unit, Caithness, the three witches, Lennox and so on. And watch out for Nesbo’s version of Great Birnam Wood – I don’t want to give any spoilers here!

It’s a tragedy, like Shakespeare’s, a tale of political ambition and the destructive power it wields, a tale of love and guilt, and of enormous greed of all kinds. Inspector Macbeth, an ex-drug addict is the head of the SWAT team, ruled by his passions, violent and paranoid. He is manipulated by Hecate, Shakespeare’s chief witch, here one of the drug lords, a man with a friendly smile and cold eyes, called by some the Invisible Hand; his ‘brew’ has made him one of the town’s richest men. Macbeth is corrupted by his renewed dependency on brew and fuelled by his passion for his wife, Lady, a tall, beautiful woman with flame-red hair who whispers seductively to Macbeth that he has to kill Duncan. And there’s a mole in their midst.

This is a dark, gritty and violent tale that had me completely enthralled and I loved it. It is the first book by Jo Nesbo that I’ve read – but it won’t be the last.

Thank you to Random UK/Vintage and NetGalley for my copy of this book for review.

Note: Macbeth was first published  March 15th 2018 by Hogarth as part of  the Hogarth Shakespeare project that sees Shakespeare’s works retold by acclaimed and bestselling novelists of today. The series launched in October 2015 and to date will be published in twenty countries.

7 thoughts on “Macbeth by Jo Nesbo”