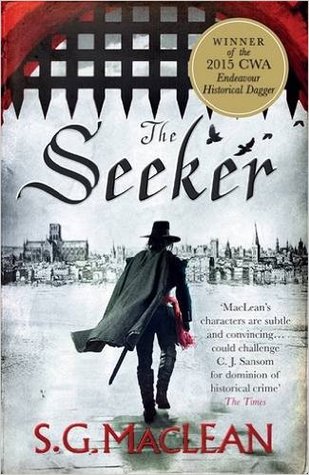 The Seeker by S G MacLean is the first book in her Damian Seeker series, historical crime fiction set during the Interregnum under Oliver Cromwell, the Lord Protector. This one is set in 1654. I’ve read the second and third books in the series and whilst I  was happy to read them as standalones now I’ve read the first one I think it would have better if I had read them in order.

Damian Seeker, Captain of Cromwell’s Guard, works for John Thurloe, Cromwell’s Chief Secretary and spy master, in charge of the security of the regime, running a virtual secret service. He is an enigmatic character, and very little is revealed about his background until very near the end of the book. In the later books, particularly in the third, Destroying Angel, I learnt a lot more about him.

Like the later books The Seeker transported me to another time and place. It was as though I was back in England in the 17th century, a place of unrest, teeming with spies, exiles and assassins. Agents, sometimes clergymen or merchants, working for Cromwell, infiltrated the Royalists abroad supporting the future Charles II; the universities too were useful with dons expert at deciphering coded messages, and there was a highly effective postal service intercepting mail to suspect individuals before being resealed and delivered. And in London, bookshops, taverns and coffee houses were places where conversations were overheard and reported to the authorities.

England in 1654 is a Republic in name only, Parliament had been dissolved in 1653 and Cromwell was appointed as Lord Protector – King in all but name, he lived in the former Palaces of Whitehall and Hampton Court and his generals imposed even greater restrictions on the freedoms of the public.

It’s a complex novel, as Seeker investigates the murder of Lieutenant John Winter, one of Cromwell’s favoured officers in his New Model Army. He had found Elias Ellingworth, a radical lawyer and journalist, and an outspoken critic of Cromwell’s regime, standing over the bleeding body clutching a knife. But Seeker is not convinced of his guilt and thus the search for the real culprit begins. It takes in royalist plots, the slave trade, dodgy merchants’ deals and an attempt on Cromwell’s life. There are many characters and I had little idea who had killed Winter until right at the end, so I read eagerly trying to work it all out.

Having read three of  the series I particularly like Damian Seeker. He is definitely a man to have on your side, a man both respected and feared, and a man to trust. The books are based on solid historical research (S G Maclean has an M.A. and Ph.D. in History from the University of Aberdeen) bringing the atmosphere and tenor of the 1650s to life before my eyes. I particularly liked all the detail about Kent’s Coffee House. I thoroughly enjoyed it and wanting to know more about the period and Cromwell I’ve bought Antonia Fraser’s book, Cromwell: Our Chief of Men.

The Bear Pit, the fourth book in the Seeker series, is due out on 11 July this year.

8 thoughts on “The Seeker by S G MacLean”