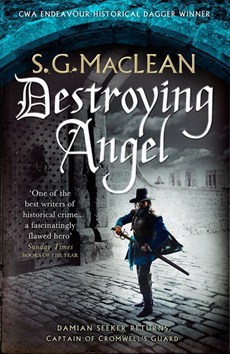 Destroying Angel is S G MacLean’s third book in her Damian Seeker series, historical crime fiction set during the Interregnum under Oliver Cromwell, the Lord Protector. Damian Seeker, Captain of Cromwell’s Guard, works for Thurloe, Cromwell’s Chief Secretary and spy master, in charge of the security of the regime. I have read The Black Friar, the second book in the series, but I have still to read first one, The Seeker – I have reserved this at the library, so hope to read it soon.

This third book is set in 1655 when Seeker is sent north by Colonel Robert Lilburne to the village of Faithly, on the Yorkshire moors. The Rule of the Major-Generals has begun in which England and Wales were divided into ten regions, each governed by a major-general who answered to the Lord Protector. Seeker is to brief the local commissioner, Matthew Pullan, on the latest anti-Royalist laws and the new  measures  and taxes to be imposed on Royalists, to prepare the way for the rule of the major-generals. As the vicar, Septimus Jenkins complains:

This England that Cromwell is making is not the England of free men. … Local officers – village constables – to be encouraged to inform on magistrates, justices of the peace, even, that they don’t consider well enough affected to the new ways. No race meetings nor cockfights nor bear-baitings to be held, no gatherings of Royalists in men’s private houses nor in public places even, for fear that should  a handful of themselves in one place they will have nothing to do but plot to overthrow Cromwell. Answer for your movements, don’t gather with your friends. (page 50)

These are hard times and Faithly is a place full of resentment and fear, brought to crisis point when Caleb Turner, a Trier appointed by the government to enforce Puritan morality arrives in the village. In particular he has come to try the vicar for ‘ungodly acts’. Added to that people have been whipped up into a frenzy of superstition at the suspicion of witchcraft. And that is made much worse when Gwendolen, Matthew’s young ward, who some suspect was a witch, dies from eating poisoned mushrooms – the deadly destroying angel fungus.

Faithly Manor, on Faithly Moor, is the home of Sir Edward Faithly, the local JP, whose father Sir Anthony and younger brother, Thomas had fought for the Stuarts. Sir Anthony was killed during the Civil War and Thomas had fled the country, whilst Edward had stayed on to run their estate. There are rumours that Thomas has now returned to England and Seeker had been sent to discover his whereabouts.

As well as searching for Thomas, Seeker has to find out how Gwendolen died – was it an accident or had the poison been intended for someone else and if so who and why? A large part of the book is set in York and, helped by the street plan showing the key areas and buildings, I enjoyed following Seeker’s walks around the City. Seeker is my favourite character in the book; an enigmatic character, a man both respected and feared, and a man to trust. I felt I knew very little, though, about his background so was pleased that as the story progressed more details of his personal history are revealed with the appearance of people from his past.

One reason I like S G MacLean’s books (her earlier books were written under the name of Shona MacLean) is that she has based them on solid historical research (she has an M.A. and Ph.D. in History from the University of Aberdeen). Another reason is that her style of writing suits me perfectly, the characters are just right, credible well-rounded people, and the plot moves along swiftly, full of atmosphere and tension.

The Bear Pit, the fourth Seeker book is due out this July, taking him back to London to investigate illegal gambling dens. And so I hope to find out yet more about Damian Seeker.

Destroying Angel qualifies for the When Are You Reading? challenge, the Calendar of Crime challenge in the category of a book originally published in July, and as it is a library book it also qualifies for the The Virtual Mount TBR challenge.