This week’s book is St Thomas’s Eve by Jean Plaidy, one of my TBRs that I’ve only just started to read. It’s the sixth in her Tudor Saga, telling the story of Sir Thomas More and his ambitious daughters. 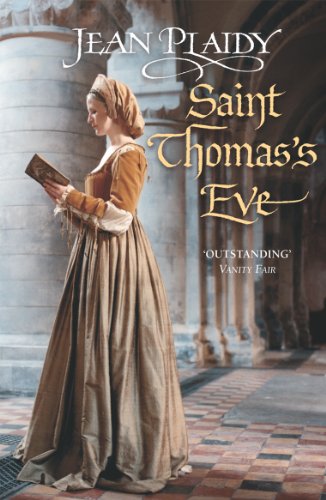 ‘And who is this man who dares oppose us?’ demanded the King. ‘Who is this Thomas More? Eh? Answer me that.’

I like this opening, setting the scene with an angry King (Henry VII) as he questions the identity of Thomas More who had refused to grant him the money he wanted.

The King was dead. And fear had died with him.

A new King had come to the throne – a boy not yet eighteen. He was quite different from his father; there was nothing parsimonious about him, and the people looked forward to a great and glorious reign. The household of Thomas More need not now consider uprooting itself.

Henry VII once warned his son, the future King of England, not to trust Thomas More; years later that same son made More his confidante and advisor. But the allegiance is dangerously one-sided. A family man, lawyer and writer, More’s ambitions are humble, whilst Henry’s are endless.

As More’s career at court rises so too does his religious fervour, much to the concern of his eldest daughter, Margaret More. Meg, as she is fondly called, is torn between her heretic husband and the secrets her father has confided in her, and already fears that one day her father will make the ultimate sacrifice for his faith.

Jean Plaidy is the pen name of the prolific English author Eleanor Hibbert, also known as Victoria Holt. I read many of Jean Plaidy’s books years ago, but I’m sure I haven’t read all of them. I just read all I could find in my local library. So, I may have read this years ago but I don’t remember it now. Although I know quite a lot about Thomas More from other books and films, when I saw this book in a secondhand book sale I just had to buy it, if only to see if I still love Jean Plaidy’s books as much now as I did years ago.

Will it live up to my expectations, I wonder? If you’ve read this or any of Jean Plaidy’s books what do you think?