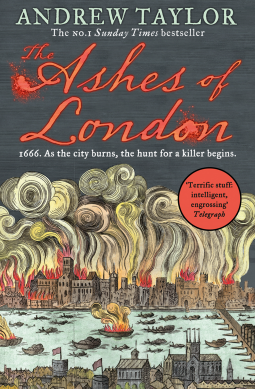 Andrew Taylor is one of my favourite authors, so I had high hopes of The Ashes of London. And I was not disappointed – I loved this book, set in 1666 in London. It was just six years after the Stuart Monarchy had been restored – Charles II was reinstated as King after twelve years of the Interregnum under the Cromwells’ reign (Oliver succeeded by his son, Richard) as Lord Protector and there are still sympathisers of their regime at large.

What struck me most is just how real it seemed as people struggled after the Great Fire had reduced a large part of London to ashes and rubble. It brings home the reality of being homeless – a refugee in your own country – and I could hear the noise of the fire, smell the smoke and almost feel the heat and the pain of the victims of the fire.

The novel is narrated in the first person by James Marwood, working for Master Williamson (under-secretary to the Secretary of State for the South) as one of the clerks on the London Gazette, and also from Cat (Catherine) Lovett’s viewpoint in the third person. James’s father, who was a Fifth Monarchist, an extreme Puritan sect, and a supporter of Cromwell, has recently been released from prison, and is now suffering from dementia. Whereas Cat’s father, Thomas Lovett, was one of the Regicides, excluded from the pardon granted to those to those guilty of most crimes committed during the Civil War and the Interregnum, now in hiding, after Charles II took the throne. They meet briefly as they both stand watching the fire engulf St Paul’s Cathedral when James snatches Cat, dressed as a boy, away from the flames. Their stories later combine when the body of a man is found in the ruins of St Paul’s Cathedral – stabbed in the neck, thumbs tied behind his back, followed by the discovery of a second murder victim in the Fleet Ditch.

Andrew Taylor has written a complex story interweaving the murder mystery, the hunt for the regicides responsible for the execution of Charles I and the historical details of the rebuilding of London after the Great Fire. Both James and Cat meet Master Hakesby, a draughtsman working with Dr Wren – that is Christopher Wren – on a design for rebuilding London, including St Paul’s Cathedral.

I found it all fascinating, fully engaged in the plot full of suspense and tension, loving the detail of its setting and the characterisation. I particularly liked James Marwood and the glimpses of Charles II as he directs the work to prevent the fire from spreading and his engagement in scientific research. It is an impressive recreation of the period, full of historical detail without overwhelming the story. In short, I loved it.

There is a second book continuing the story, The Fire Court, to be published on 5th April, which I have just started to read.

Many thanks to Harper Collins for a review copy via NetGalley.

10 thoughts on “The Ashes of London by Andrew Taylor”