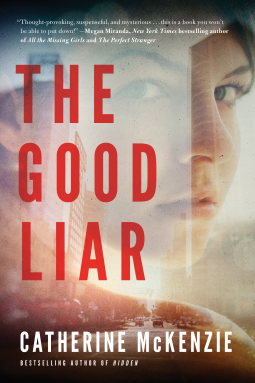 Can you hide a secret with the whole world watching?

When an explosion rips apart a Chicago building, the lives of three women are forever altered.

A year later, Cecily is in mourning. She was supposed to be in the building that day. Instead, she stood on the street and witnessed it going down, with her husband and best friend inside. Kate, now living thousands of miles away, fled the disaster and is hoping that her past won’t catch up with her. And Franny, a young woman in search of her birth mother, watched the horror unfold on the morning news, knowing that the woman she was so desperate to reconnect with was in the building.

Now, despite the marks left by the tragedy, they all seem safe. But as its anniversary dominates the media, the memories of that terrifying morning become dangerous triggers. All these women are guarding important secrets. Just how far will they go to keep them?

This is the first book by Catherine McKenzie* that I’ve read and I was immediately drawn into this story, wondering who I could believe. The narration alternates between the three woman, Cecily, Kate and Franny as their stories are gradually revealed. Franny’s story is told through the transcripts of her interviews with Teo, who is making a documentary about the tragedy and its impact on the families concerned both at the time of the explosion and also a year later.

Cecily, immediately comes across as trustworthy – and yet there is something she is obviously concealing. It’s obvious right from the start that Kate has a secret and Franny appears to be the most fragile and desperate to find out more about her biological mother. With a title like the ‘good liar‘ I was suspicious about all three women; which one is lying, can you believe any if them, and if so who? Catherine McKenzie built up the suspense, providing back stories for each woman, revealing reasons to distrust their stories and the way they present themselves.

I enjoyed the suspense, and trying to work out who was lying. It kept my interest to the end, even though I thought some of the ‘secrets’ were easy to detect. It builds up to a satisfying conclusion with a twist right at the end – a book of lies and deceit from start to finish.

My thanks to Lake Union Publishing for a review copy via NetGalley.

Catherine’s first book writing as Julie Apple (the protagonist in FRACTURED), THE MURDER GAME, was released in November, 2016. SPIN has been optioned for a television series. A short film of ARRANGED was made in 2014 and won a Canadian National Screen Institute Award. Catherine was on set while they filmed it. It was one of the highlights of her writing life.

Catherine’s next novel, THE GOOD LIAR, will be published on April 3, 2018.

An avid skier and runner, Catherine climbed the Grand Teton in 2014.

And if you want to know how she has time to do all that, the answer is: robots.

2 thoughts on “The Good Liar by Catherine McKenzie”