One of the books I’m currently reading is Night Falls on Ardnamurchan: The Twilight of a Crofting Family by Alasdair Maclean. 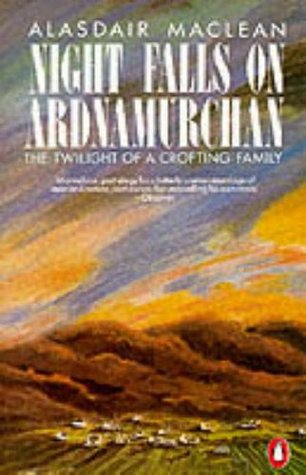 We hardly conceive of our parents as human. There are innumerable actions, there are whole areas of life and thought, that we do not care to see connected with them, that we scarcely allow ourselves, far less others, to connect with them.

The Scottish poet Alasdair Maclean records the rise and fall of the remote crofting hamlet in the little-known area of Ardnamurchan where his family had its roots.

Perceptive, humorous and sharp he binds his own account of the crofter’s lifestyle and extracts from his father’s journal, a terser, more factual and down-to-earth vision of the day-to-day. It is an unusual and memorable story, one that not only describes life in a dying crofting community but also illuminates the shifting, often tortuous, relationship between children and their parents.

The events on page 56 are concerned with winkle gathering, which provided an additional income to many of the crofters. The winkles were gathered and then stored where they could be refreshed by sea water until they were shipped to a merchant.

The reaction of a bag of thirsty winkles to a good splash of Mother Atlantic is delightful. For a few minutes all is creaks and squeaks and bubblings, as though a buzz of winkly conversation had broken out.

I found it was slow going at first, but now I’ve read half the book I’m really enjoying Maclean’s commentary on his father’s journal.

9 thoughts on “My Friday Post: Night Falls on Ardnamurchan”