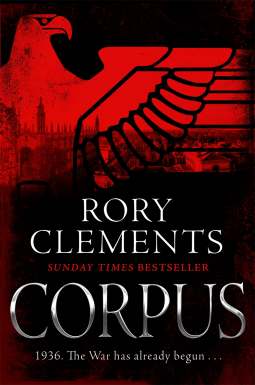 Rory Clements is best known for his John Shakespeare series, but Corpus is the first of his books I’ve read, so I was unsure that I would like it when I received an ARC from NetGalley. It is due to be published on 26 January 2017. (I read Corpus in December 2016.)

Europe is in turmoil.

The Nazis have marched into the Rhineland.

In Russia, Stalin has unleashed his Great Terror.

Spain has erupted in civil war.

In Berlin, a young Englishwoman evades the Gestapo to deliver vital papers to a Jewish scientist. Within weeks, she is found dead in her Cambridge bedroom, a silver syringe clutched in her fingers.

In a London club, three senior members of the British establishment light the touch paper on a conspiracy that will threaten the very heart of government. Even the ancient colleges of Cambridge are not immune to political division. Dons and students must choose a side: right or left, where do you stand?

When a renowned member of the county set and his wife are found horribly murdered, a maverick history professor finds himself dragged into a world of espionage which, until now, he has only read about in books. But the deeper Thomas Wilde delves, the more he wonders whether the murders are linked to the death of the girl with the silver syringe – and, just as worryingly, to the scandal surrounding King Edward VIII and his mistress Wallis Simpson…

Set against the drumbeat of war and moving from Berlin to Cambridge, from Whitehall to the Kent countryside, and from the Fens to the Aragon Front in Spain, this big canvas international thriller marks the beginning of a major new series from bestselling author Rory Clements.

The setting in 1936 is well done, a time when Europe was once more on the brink of war. Civil war has broken out in Spain, in Britain some people are openly supporting the Nazis in Germany and politicians are torn between wanting Edward VIII to abdicate the throne or give up his relationship with Wallis Simpson. Against this background Corpus focusses on Tom Wilde’s investigations first into Nancy’s death, aided by her friend Lydia, who is convinced that Nancy was murdered, and then into yet more murders.

I was totally convinced by the characters, in particular Tom Wilde, a professor of history who is writing a biography of Sir Robert Cecil, the Elizabethan and Jacobean statesman, the successor to Sir Francis Walsingham as the Queen’s spymaster (a nod to his earlier series, I thought). And I was immersed in the mysteries, with spies, communists and Nazis, Spanish Gold, Soviet conspirators, politicians and academics all intricately woven into the plot. It’s pacy, full of action, violence and double-cross – a most satisfying and compelling thriller.

I loved Corpus and I shall certainly look out for Rory Clements’ other books.

2 thoughts on “Corpus by Rory Clements”