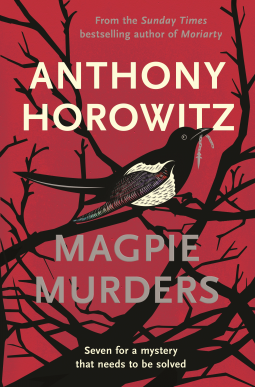 I previously enjoyed The House of Silk by Anthony Horowitz, so when I saw Magpie Murders  on NetGalley I was keen to read it and delighted when I received an uncorrected proof. I think it is an outstanding book by a master story-teller, with a wonderfully intricate plot. It’s a prime example of a puzzle-type of crime fiction combining elements of the vintage-style golden age crime novel with word-play and cryptic clues and allusions to Agatha Christie and Arthur Conan Doyle. It’s also a novel within a novel, with mystery piled upon mystery. I loved it.

The outer story and the contemporary mystery is that of Alan Conway, the author of the Atticus Pund Mysteries. His editor, Susan Ryeland is reading a manuscript of his latest novel Magpie Murders, expecting to enjoy it as much as his earlier books, even though she really couldn’t stand Conway himself. What she wasn’t prepared for is that this book would change her life.

The inner story, that told in Conway’s novel is a whodunnit, a murder mystery full of twists and turns with plenty of red herrings. I was enjoying it as much as Susan as she read of the death of Mary Blakiston in the little village of Saxby-on-Avon in 1955. Mary was an unpleasant character. She had been found dead at the bottom of the stairs at Pye Hall where she was the cleaner for the owner, Sir Magnus Pye. It appeared that she had tripped and fallen down the stairs.Then Magnus is also found dead, but this was obviously murder as he had been beheaded.

So back to the outer story. When Susan came to the end of the manuscript she found it wasn’t finished – there was no denouement. And she couldn’t contact Conway to get the final chapters of the book and then she discovered that he was dead. So, she sets out to find the missing chapters and in so doing discovers even more mysteries – was Conway’s death an accident, suicide or murder? Like Mary Blakiston in his novel, he was not a popular man, and there are a number of other parallels between his novel and his real life.

Magpie Murders is a really satisfying read, with believable characters, set in beautifully described locations, tantalisingly mysterious and so, so readable. I also particularly liked the use of the rhyme of ‘One for Sorrow’ in the chapter headings of Conway’s novel in the same way that Agatha Christie used ryhmes in some of her books. It’s quite long, but the pages sped by as I was drawn into both stories and keen to find the answers to all the questions all the mysteries it had posed.

Many thanks to NetGalley and the publishers Orion Books for an ARC.