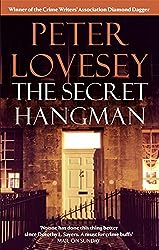 The Secret Hangman is the first book I’ve read by Peter Lovesey and as it’s the 9th in his Peter Diamond series I was hoping it would read OK as a stand alone book – it does. Peter Diamond is a Detective Superintendent with the Bath police.

Peter Diamond, the Bath detective, is having woman trouble. His boss wants him to find a missing person, the daughter of one of her friends in the choir. He is not enthusiastic. Another woman, who calls herself his Secret Admirer, wants to set up a meeting in a local pub. He tries ignoring her. Then there is sexy Ingeborg Smith, the ex-journo detective constable, distracting the murder squad from their duties. No one ignores Ingeborg.

Murder becomes a possibility when a woman’s body is found hanging from a playground swing in Sydney Gardens and a suspicious second ligature mark is found around her neck. Diamond investigates the victim’s colourful past. More hangings are discovered and soon he is certain that a secret hangman is at work in the city . . .

Diamond’s wife had died three years earlier – as I haven’t read the earlier books I suppose this is a spoiler, but it is important to know this from the start of this book, because he is now beginning to recover from his grief and becomes rather too involved with an attractive woman he met by chance in a carpark. The story of their relationship runs parallel to the investigations into the hangings and the series of ram raids his boss wants him to investigate.

At first there doesn’t appear that there is any connection between the victims and the motive for killing them only becomes clear quite late on in the book. The only similarities are that the victims are all couples – the wives are killed first, followed a few days later by their husbands, and all the bodies are found in public places as though the killer wanted their deaths to be discovered and publicised.

It takes a while before Diamond cottons on to the identity of the killer – and I was there some time before him, but that didn’t spoil my enjoyment of the book. Diamond is not a brilliant detective. He is rather old-school, not above a bit of threatening behaviour (and more) to suspects, not bothered about upsetting his boss, nor is he comfortable with technology. But he is determined and thorough – I liked him and want to read more from the series.

Peter Lovesey is a British writer of historical and contemporary crime novels and short stories. He has written many books, not just the Peter Diamond series, but also a series of books featuring Sergeant Cribb, a Victorian-era police detective based in London – the full list of his books is on his website – there are plenty to read!

Reading challenges: Mount TBR Reading Challenge – a book I’ve owned for 7 years, and one I should have read ages ago, but well worth the wait.

One thought on “The Secret Hangman by Peter Lovesey”