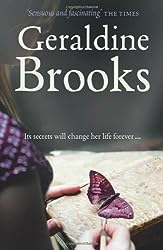 Now:  I’ve decided to concentrate on books from my to-be-read shelves and picked People of the Book by Geraldine Brooks, a book I’ve owned for nearly eight years. I can’t think why I haven’t read it before as so far I’m loving it.

People of the Book takes place in the aftermath of the Bosnian War, as a young book conservator arrives in Sarajevo to restore a lost treasure.

When Hannah Heath gets a call in the middle of the night in her Sydney home about a precious medieval manuscript which has been recovered from the smouldering ruins of wartorn Sarajevo, she knows she is on the brink of the experience of a lifetime. A renowned book conservator, she must now make her way to Bosnia to start work on restoring The Sarajevo Haggadah, a Jewish prayer book ‘“ to discover its secrets and piece together the story of its miraculous survival. But the trip will also set in motion a series of events that threaten to rock Hannah’s orderly life, including her encounter with Ozren Karamen, the young librarian who risked his life to save the book. 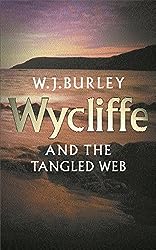 Then: I’ve recently finished Wycliffe and the Tangled Web by W J Burley, another book from my to-be-read shelves.

A beautiful schoolgirl goes missing from a Cornish village on the day she has told her boyfriend and sister she is pregnant. The possibility that she has been raped or murdered – or both – grows with every passing hour, and Chief Superintendent Wycliffe is brought in on the case.

The investigation reveals a complex network of family relationships and rivalries centred on the girl; and then Wycliffe finds a body – but not the one he expects. Have there been two murders? And if so, are they connected?

Wycliffe digs deeper, and soon realises that just beneath the normal, day-to-day surface of the community lies a web of hatred and resentment – a web he will have to untangle if he is to find the key to the mystery . . .

Next: I’m reluctant to say what I’ll be reading next because I usually change my mind when the time comes. But, I shall be reading The Mill 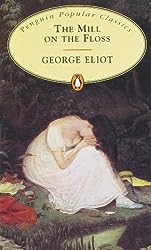 on the Floss by George Eliot for the Classics Club Spin some time in April – yet another book I’ve owned for years.

George Eliot drew on her own anguished childhood when she depicted the stormy relationship between Maggie and Tom Tulliver. Maggie’s often tormented battle to do her duty and belong on the one hand, and to be  herself, wild and natural, on the other, propels her from one crisis to another. As the Tulliver fortunes decline and fall, the rift between Maggie and her family becomes almost irreconcilable. But Maggie’s biggest mistake of all is to fall in love with Stephen Guest who is engaged to another woman.

Both a sharp and observant picture of English rural life and a profoundly convincing analysis of a woman’s psychology, The Mill on the Floss is a novel that tackles the complexities of morality versus desire.

What about you? What are you reading this week?