This is a book that really captured my imagination. I loved everything about it – the descriptive passages, the mystery, the secrets and the people involved. It was all real to me. It’s one of the best books, if not the best book, I’ve read this year. 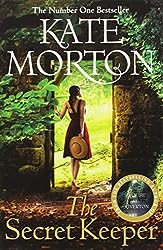 The Secret Keeper by Kate Morton has been sitting unread for two years on my bookshelves, but if I’d read it earlier I wouldn’t have had the pleasure of reading it now – it was well worth the wait!

It begins on a summer’s day in 1961 in Suffolk when sixteen-year old Laurel is shocked when she sees her mother stabbing a stranger who had come to their farm. Fast forward 50 years Laurel and her three sisters and brother are coming to terms with the fact that their mother, Dorothy is moving closer to the end of her life. Laurel realises that there is so much she doesn’t know about Dorothy’s life and when they find a photograph of Dorothy and a friend, Vivien, in a book of the play Peter Pan, it arouses old and ugly memories for Laurel – images of her mother’s frightened face as she confronted the stranger. Who was Vivien and who was the stranger? Why was Dorothy so scared? Laurel is determined to find out.

It’s a story moving between time periods from 2011, back to the 1960s and also to the 1940s when Dorothy first met and fell in love with Jimmy, a war photographer, and also became friends with the wealthy and beautiful Vivien, married to a successful novelist.  Laurel, with the help of her brother, Gerry, tracks down records throwing light on Dorothy’s and Vivian’s past, back to war-time England and pre-war Australia.

It’s not a straight forward story. By that I don’t mean it’s difficult to read, because each time period is clearly headed and the characters are clearly defined. But there are so many twists and turns – I thought several times I’d got things clear and knew where the story was heading only a bit later on to realise that not all the clues had been revealed and I had to revise my thoughts. It’s so cleverly written and so well plotted that it was only near the end that I had an inkling of Dorothy’s relationship with Vivien and what had really happened to them all. It really is a book I didn’t want to put down and also a book I wanted to enjoy as long as possible. By the end, though, I couldn’t turn the pages fast enough!

Kate Morton’s next book, The Lake House is due to be published in October 2015. I’m looking forward to reading it.

7 thoughts on “The Secret Keeper by Kate Morton”