Yet again I’m reading faster than I’m reviewing, so this post is not a full review but a few thoughts on The Kill by Jane Casey. Unless I write about a book straight after I finish reading it gets pushed to the back of my mind and sadly that is what has happened in this case, which is a shame as it’s a brilliant book, the fifth in her DC Maeve Kerrigan series and I fully agree with the quotation from the Sunday Times that ‘Jane Casey’s police procedurals go from strength to strength.’ 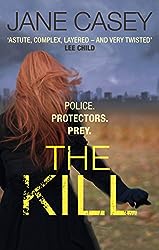 The book begins in Richmond Park in London at 00.43 where a couple are badger-watching but to their horror are witnesses, albeit at a distance, to a murder.

The victim is a police officer. But this is just the first murder and yet more police officers are killed. Maeve and her boss, DI Josh Derwent are part of the Met’s team assigned to investigate. They have no idea about the motive for the murders as the attacks seem to be random, from the first victim alone in his car (why was he there at that time anyway?), to the officers of the Territorial Support Unit killed as they patrolled the Maudling Estate – is it a reaction to the police killing a young and innocent black teenager? The MP, Geoff Armstrong thinks so.

This is a fast-paced novel, with an intriguing and complex plot and featuring characters that have appeared in the earlier books, developing their relationships. Some issues look as though they have been resolved, such as Superintendent Godley’s guilty secret, and others such as Maeve’s relationship with her boyfriend Rob, also a police officer come to a head, whereas Derwent and Maeve continue to have a confrontational working relationship and the interaction between them and DCI Una Burt gets even worse. I suppose it’s possible to read this as a standalone, but because of the back stories I think it is better to read them in order.

I found it absolutely compelling reading.

4 thoughts on “The Kill by Jane Casey: Book Notes”