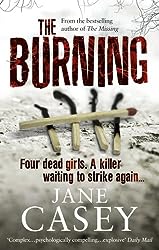 The Burning by Jane Casey is one of the books I selected for the TBR Pile Challenge 2015. It’s a book that I read about on other book blogs and thought I would like.  I was right – I really enjoyed it.

It’s the first the DC Maeve Kerrigan series. Maeve is on the murder task force investigating the case of the serial killer the media call The Burning Man. Four young women have been brutally murdered, beaten to death and their bodies burnt in secluded areas of London’s parks. When a fifth body is discovered that of Rebecca Haworth, it appears to be the work of The Burning Man – but is it, there are slight differences? The more that Maeve and her colleague Rob Langton check out the facts it appears it could be a copy-cat killing.

The pace of the book is quite slow at first as the characters are introduced and the story unfolds mainly through Maeve’s eyes  with some  chapters narrated by Rebecca’s friend Louise, and briefly by Rob. Because the pace is slow to begin with the main characters are fully rounded – Maeve in particular is a likeable character, intelligent and empathetic, working to impress her male colleagues and determined to catch the murderer. She’s new to the job, which both her boyfriend and her family criticises. Rebecca’s character is revealed through Louise’s eyes,  fleshed out as other friends give their versions of her past to Maeve and Rob. As the pace picks up, a complex  plot develops providing several suspects which kept me turning the pages right to the end.

I have the third Maeve Kerrigan book, The Last Girl, but I think I’ll postpone reading it until I’ve read the second book, The Reckoning. There are now six books in the series and Maeve has her own website!

As well as the TBR Pile Challenge The Burning completes one of the categories in the What’s In a Name challenge, that of a book title containg a word ending in ‘ing’, the My Kind of Mystery challenge and also the Mount TBR Reading Challenge (a book I’ve owned prior to 1 January 2015).

8 thoughts on “The Burning by Jane Casey”