This is the 20th book in her Commissario Guido Brunetti series. Brunetti is somewhat of a rarity in crime fiction novels – a detective who is happily married with two children. He doesn’t smoke or drink to excess and often goes home for lunch to his beautiful wife Paolo.

It’s set in Venice where Donna Leon has lived for many years. I was 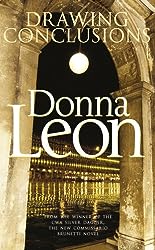 immediately drawn into this book, with its wonderful sense of locality, believable characters and intricate plot.  Anna Maria Giusti discovers her elderly neighbour Constanza Altavilla lying dead on the floor of her apartment. Apparently she has died from a heart attack but Brunetti, called to the scene because there was blood on the floor, suspects that she may have been attacked as there are bruises on her neck and shoulders. His boss, Vice-Questore Patta wants to close the case but Brunetti decides to make further investigations.

He meets Signora Altavilla’s son and visits the nursing home where she had been helping out. His suspicions are further aroused when the nun in charge of the home is reluctant to answer his questions and by the conversations he has with some of the people she visited. With the help of Inspector Vianello and Signorina Elettra, Patta’s secretary, he discovers a network of deception and lies.

This is a reflective and thoughtful book and I was completely engrossed in it. I haven’t been to Venice, but it came to life as Brunetti walks the streets:

As he walked alongside Rio della Tetta, Brunetti was cheered, as always happened when he walked here, by the sight of the most beautiful paving stones in Venice. Of some colour between pink and ivory, many of the stones were almost two metres long and a metre wide and gave an idea of what it must have been to walk in the city in its glory days. (page 63)

It’s well-paced and there are several unexpected twists that kept me wondering almost to the end what had actually happened to cause Signora Altalvilla’s death. It’s more than crime -fiction as Brunetti ponders on life, the problems of ageing, and the nature of truth and honesty. I didn’t want the book to end – that’s how good it is.