For my ABC Wednesday posts I’ve been highlighting either authors or artists whose work I enjoy. This week it’s the letter K and there was no doubt about who that brought to mind – Barbara Kingsolver, who is the author of one of my very favourite books – The Poisonwood Bible.

I bought this book in an airport bookshop just before boarding a plane to go on holiday to Cyprus; that gave me plenty of time to read a good chunk of the book before we landed. I remember being very amused by the description of how the Price family got round the forty-four pound per person luggage limit on their flight to the Congo. I’d just struggled to get our luggage allowance down to the required limit for our holiday, but I hadn’t thought of doing what they did – each of them wearing multiple layers of clothing and other goods, such as tools and cake-mix boxes tucked out of sight in their pockets and under their waistbands. Cake-mixes were an essential item as Mrs Price said, ‘they won’t have Betty Crocker in the Congo.’ 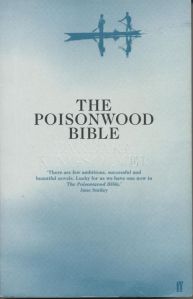 I soon read the rest of the book by the side of the pool, my hands covered in sun cream removing the gold lettering of Barbara Kingsolver’s name.

This is the book’s description from the back cover:

Told by the wife and four daughters of Nathan Price, a fierce evangelical Baptist who takes his family and mission to the Belgian Congo in 1959, The Poisonwood Bible is the story of one family’s tragic undoing and remarkable reconstruction over the course of three decades in postcolonial Africa. They carry with them all they believe they will need from home, but soon find that all of it – from garden seeds to Scripture – is calamitously transformed on African soil.

It is a brilliant book – one that I’ve read at least twice and would eagerly read again. The setting and historical figures and events are real, even though the characters and story are fictional. Barbara Kingsolver writes in her author’s introduction to the book that she relied on her memory, travel in other parts of Africa and many people’s accounts of the natural, cultural and social history of the Congo/Zaire to write the novel.

She wrote that her parents, who were different in every way from the parents in the book, were

… medical and public-health workers, whose compassion and curiosity led then to the Congo. They brought me to a place of wonders, taught me to pay attention, and set me early on a path of exploring the great, shifting terrain between righteousness and what’s right. (page x)

It’s a book that has stuck long in my memory, maybe because it paints such a remarkable picture based on reality and truth.

I’ve read some of her other books, namely The Bean Trees, Homeland and Other Stories, and Prodigal Summer,and whilst I enjoyed them, none of them were, I thought, as good as The Poisonwood Bible. I have The Lacuna, waiting to be read.