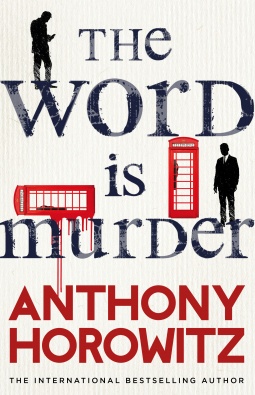 A wealthy woman strangled six hours after she’s arranged her own funeral.
A very private detective uncovering secrets but hiding his own.
A reluctant author drawn into a story he can’t control.
What do they have in common?

Unexpected death, an unsolved mystery and a trail of bloody clues lie at the heart of Anthony Horowitz’s page-turning new thriller.

SPREAD THE WORD. THE WORD IS MURDER.

The Word is Murder is a very clever and different type of murder mystery. I don’t think I’ve read anything like it before, one in which the author himself plays a major role.

Diana Cowper was killed later the same day after making the arrangements for her funeral. She was strangled in her own home. The police at first thought she’d been killed during a burglary, but there were no fingerprints or indeed any other clues to help find her killer.

The novel goes into a different realm with the introduction of ex-policeman, Daniel Hawthorne, who had been an adviser for Horowitz’s Foyle’s War series. The police call on Hawthorne as a consultant on out-of-the ordinary cases and he is working on the Diana Cowper murder. He proposes that Horowitz writes a book about him and his investigations into the case. However, they disagree about what Horowitz should write, which highlights the difference between writing crime fiction and true life crime books – and Horowitz gets dragged into the investigations.

At first I was slightly confused – were the details about Horowitz fact or fiction (a lot of it is true), was Hawthorne a real person or a fictional character, what was fact and what was fiction? It really is one of the most complicated and bemusing books I’ve read, full of realistic characters acting in a mystery full of red herrings and multiple twists and turns. I was soon totally immersed in this fascinating novel. I loved Magpie Murders, and I think Horowitz The Word is Murder is equally as amazing and maybe even better! I was totally unable to solve the mystery, the clues were all there, but I was so involved in sorting out what was real and what wasn’t and enjoying the puzzle that I completely missed them.

I am so delighted that I received a copy of this book from the publisher, via NetGalley, for review.