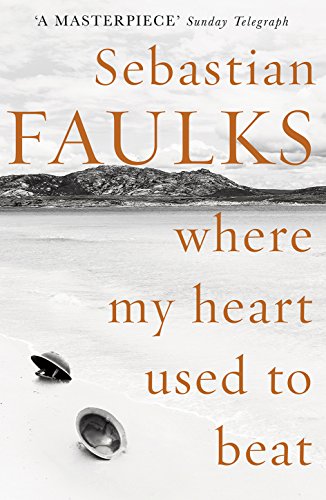 On Thursday I went to Barter Books in Alnwick and brought home a pile of books – more about that later on. One of those books is Where My Heart Used to Beat by Sebastian Faulks:

With its free peanuts and anonymity, the airline lounge is somewhere I can usually feel at home; but on this occasion I was in too much of a panic to enjoy its self-importance.

I can’t say I have ever felt at home in an airport lounge! I’m wondering what the narrator is panicking about.

My lodging was on the top floor – of course – with windows on both sides. The study was at the front, but the bedroom overlooked a willow and a stream, on which two young men were inexpertly rowing. Some lines from Tennyson – ‘By the margin, willow-veil’d …’ swam in and out of my mind.

On a small island off the south coast of France, Robert Hendricks – an English doctor who has seen the best and the worst the twentieth century had to offer – is forced to confront the events that made up his life. His host is Alexander Pereira, a man who seems to know more about his guest than Hendricks himself does.
The search for the past takes us through the war in Italy in 1944, a passionate love that seems to hold out hope, the great days of idealistic work in the 1960s and finally – unforgettably – back into the trenches of the Western Front.

This moving novel casts a long, baleful light over the century we have left behind but may never fully understand. Daring, ambitious and in the end profoundly moving, this is Faulks’s most remarkable book yet.

I didn’t watch the TV series Faulks on Fiction but was interested enough to buy the book. It seemed a good idea to trace the history of the novel through a selection of fictional characters. To a certain extent Sebastian Faulks has done that, but the book is really about the characters and only touches on the development of the novel. Faulks, he reveals in the Acknowledgements, would prefer his book to be called Novel People, which I think would be better.

And if you haven’t read the books and don’t want to know the plot don’t read this book, because Faulks gives these in detail. There are 28 characters, categorised into Heroes, Lovers, Snobs and Villains. It is a very personal book as Faulks himself features in his descriptions, telling of when he first read a book and what he thought on reading it and his impressions on re-reading. I liked that. He also discusses the way literary criticism has changed in that over the last twenty years the author’s life and its bearing on the works has become an issue:

The bad news was that it opened the door to speculation and gossip. By assuming that all works of art are an expression of the authors’ personality, the biographical critics reduced the act of creation to a sideshow. It has now reached such a pass that the only topic some literary journalists seem able to approach with confidence is the question of whom or what people and events in novels are ‘based on’. (page 2)

Accordingly, Faulks focuses on the plot and the characters rather than on the authors, although oddly enough he does indulge in some ‘based on’ descriptions, eg in his chapter on Graham Greene’s The End of the Affair where he discusses whether or not the character of Sarah was ‘based on’ a real life lover of Greene’s.

Faulks is rather disparaging about monthly book groups where the topic is not the novel but a discussion about the author’s life and how it is reflected in the book, together with how this is borne out by the ‘readers’ own experience of such matters’. (page 6) His book aims to show how novelists ‘create – from nothing, or from imagination’. It’s hard to imagine that novels are so divorced from life!

However, despite this and despite not agreeing with all of his interpretations – it would be strange if we all agreed about everything – I enjoyed reading this book. I’d read the majority of the books he discusses and enjoyed being reminded of them – books such as Pride and Prejudice, although Faulks fails to see the attraction of Mr Darcy, who he places in the section on Lovers, describing him as a  ‘rude and gloomy man‘, a ‘manipulative, hypocritical, self-centred depressive‘ and considers that Elizabeth is his ‘lifelong Prozac‘.  I really must re-read Pride and Prejudice, because my memory of Darcy and Elizabeth is very different from Faulks’s picture of them.

Other books he discusses include Robinson Crusoe, Vanity Fair, Wuthering Heights, Lady Chatterley’s Lover, The Prime of Miss Jean Brodie, Clarissa and Great Expectations, to name but a few.

I haven’t read Wilkie Collins’s The Woman in White and as I  want to read it without Faulks’s opinion in my mind I haven’t read the chapter on Count Fosco in the section on Villains.

As for the other books I haven’t read, which he describes, I think I don’t need or want to read them, such as Lucky Jim by Kingsley Amis, Money by Martin Amis,or The Line of Beauty by Alan Hollingsworth. I also don’t want to read Faulks’s new James Bond book, Devil May Care, which he plugs in the section on Snobs. But maybe I’m being too dismissive, because as I didn’t agree with all his views on the books I have read, so maybe I should read the books for myself.