I read seven books in January, six of them are fiction and one non-fiction, all of them good – some indeed are excellent. So far I’ve only reviewed three of them:

Turning for Home by Barney Norris, a beautifully and lyrically written novel. I loved this. It’s set on the day of Robert’s 80th birthday celebration and the narrative alternates between Robert’s and his granddaughter Kate’s stories, reflecting on their lives.

The Wicked Cometh by Laura Carlin, historical fiction set in England in 1831 – a tale of wickedness and evil. Although this begins well, it drags in the middle and ends with a final twist I didn’t find convincing.

The Confession by Jo Spain, a standalone book, set in Ireland.  Banker, Harry McNamara, recently cleared of multiple accounts of fraud, is brutally attacked in his home in front of his wife, Julie. I was gripped by this story and I had to read it quickly to find out what really happened.

I didn’t get round  to writing reviews for the other books, so here are a few notes on two of them, both books that I enjoyed. Both are written achronologically which took a bit of getting used to, but it worked well. This meant that with both books you have to be on your toes, so to speak, to keep track of where you are and who is who. And I really should have made notes as I read – and written about them not long after I finished them!

Notes From An Exhibition by Patrick Gale. It’s been a month since I finished reading this and unfortunately the details are rather vague in my mind now. Artist Rachel Kelly, a manic-depressive, subject to highs and lows is found dead in her Penzance studio, leaving her family with lots of unanswered questions. It becomes clear that her Quaker husband knew nothing about her early life. The narrative moves backwards and forwards from the past to the present and is told from different characters’ perspectives. It reminded me a bit of Sylvia Plath’s The Bell Jar in parts. I enjoyed the sections on Quakerism and working out the puzzle of Rachel’s life and her relationships. But I wasn’t sure about the ending – I should probably re-read the book.

After You’d Gone by Maggie O’Farrell – her debut novel. The main character, Alice is in a coma after being in road accident, which may or may not have been a suicide attempt. She has been grieving the death of her husband, John.

It’s quite a complicated story, following the life stories not only of Alice, but also those of her mother, Ann (who I didn’t like much),  her grandmother, Elspeth (who I did like very much), her two sisters and of John. What was it that Alice saw at Edinburgh station that shocked her so much? You don’t find out until the end of the book, although I did have an idea before that what it meant to her and why it was so upsetting. I’ve already started to re-read it as I’m sure there’s a lot I missed on my first reading, especially as some of it is written in the present tense. And I may write a more detailed post at some point.

And my reviews of these books will follow later:

This week I’m featuring Notes from an Exhibition by Patrick Gale. This is one of the TBRs I featured in my last A – Z of TBRs. I’ve decided now is the time to read this book which has been on my TBR shelves for five years. 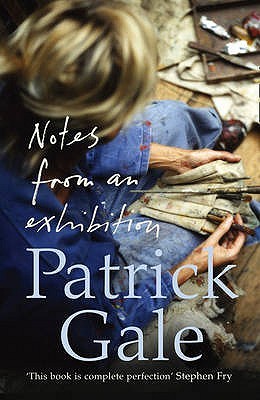 The title of this book is taken from the notes displayed describing works of art in a gallery or museum or referring to Rachel Kelly’s art or possessions, and each section of this book is headed by one of these notes. This is the note heading the first chapter of the book:

She had less strength in her arms than in vigorous youth and hated asking for help in stretching canvases. Besides Anthony had arthritic wrists so was not much stronger than she. So she had taken more and more to working on convenient whiteboards rarely larger than a biscuit tin, sometimes s small as a piece of toast.

Gifted artist Rachel Kelly is a whirlwind of creative highs and anguished, crippling lows. She’s also something of an enigma to her husband and four children. So when she is found dead in her Penzance studio, leaving behind some extraordinary new paintings, there’s a painful need for answers. Her Quaker husband appeals for help on the internet. The fragments of a shattered life slowly come to light, and it becomes clear that bohemian Rachel has left her children not only a gift for art – but also her haunting demons.

I’m now up to M, N, and O in my A – Z of TBRs, a series of posts in which I take a fresh look at some of my TBRs to inspire me to read more of them by the end of the year, or maybe to decide not to bother reading them after all. These TBRs are all physical books – I’ve not included e-books. Looking at my books like this is encouraging me to read more of my own books as I’ve read two of the books I’ve featured in the earlier posts.

M  – is for Mercy by Jodie Picoult, a book I’ve had since 2008. LibraryThing predicts that I probably won’t like this book. Two cousins are driven to extremes by the power of love, as one helps his terminally ill wife commit suicide and the other becomes involved in a passionate affair with his wife’s new assistant.

I bought this book because I’ve read and enjoyed three other books by Jodie Picoult.

According to the sworn voluntary statement of James MacDonald, his wife had been suffering from the advanced stages of cancer and had asked him to kill her. Which did not account for the raw scratches on his face, or the fact that he had traveled to a town he had never set foot in to commit the murder. Maggie had not videotaped her wishes, or even written them down and had them notarized to prove she was of sane mind – Jamie said that she hadn’t wanted it to be a production, but a simple gift.

What it boiled down to, really, was Jamie’s word. Cam’s only witness was dead. He was supposed to believe the confession of James MacDonald solely because he was a MacDonald, a member of his clan. (page 39)

N – is for Notes from an Exhibition by Patrick Gale (on my TBR shelves since 2011). LibraryThing predicts that I probably will like this book. When troubled artist Rachel Kelly dies painting obsessively in her attic studio in Penzance, her saintly husband and adult children have more than the usual mess to clear up. She leaves behind an extraordinary and acclaimed body of work – but she also leaves a legacy of secrets and emotional damage that will take months to unravel.

I haven’t read any of Patrick Gale’s books, but I was attracted to it by the blurb.

‘We are here to say goodbye to our dear Rachel, who was a regular attender since Anthony first brought her to Penzance a little over forty years ago. For those of you who have never been to a Friends’ Meeting before, this may not be the kind of funeral you’re used to. The proceedings take the form of a Quaker Meeting for Worship. This is based on silent contemplation. There are two aims in our worship: to give thanks for the life that has been lived and to help those who mourn to feel a deep and comforting sense of divine presence within us. The silence may be broken by anyone, Quaker or not, who feels moved to speak, to pray or offer up a memory of Rachel.’ (page 62)

O – is for An Officer and a Spy by Robert Harris a book I’ve only had for nearly two years. LibraryThing predicts that I probably will like this book. A recreation of a scandal that became the most famous miscarriage of justice in history, this is the story of the infamous Dreyfus affair told as a chillingly dark, hard-edged novel of conspiracy and espionage. Paris in 1895. Alfred Dreyfus, a young Jewish officer, has just been convicted of treason, sentenced to life imprisonment at Devil’s Island, and stripped of his rank in front of a baying crowd of twenty-thousand.

I bought this on the strength of the other books by Robert Harris that I’ve enjoyed. I’ve heard of the Dreyfus affair but know very little about it.

Beneath the letters is a thin manilla envelope containing a large photograph, twenty five centimetres by twenty. I recognise it immediately from Dreyfus’s court martial – a copy of the covering note, the famous bordereau, that accompanied the documents he passed to the Germans. It was the central evidence against him produced in court. Until this morning I had no idea how the Statistical Section had got its hands on it. And no wonder. I have to admire Lauth’s handiwork. Nobody looking at it could tell it had once been ripped into pieces: all the tear marks have been carefully touched out, so that it seems a whole document. (pages 40 -41)