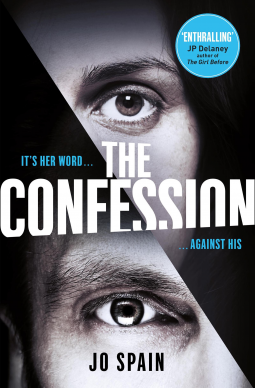 The Confession is the first book by Jo Spain that I’ve read, so I didn’t know what to expect. But the blurb interested me and I’m delighted to say that I enjoyed this book and as this is Jo Spain’s fifth book I’ll be able to read more of her work. She is the author of the Inspector Tom Reynolds Mystery books, police procedurals based on the investigations of a Dublin-based detective team. The Confession is a standalone book.

Set in Ireland, it begins as Harry McNamara, a banker, recently cleared of multiple accounts of fraud, is brutally attacked in his own home in front of his wife, Julie. The attacker, JP Carney immediately goes to the police and confesses that he had killed Harry.  JP insists he doesn’t know the identity of the man he attacked and that he didn’t know what had come over him – it was as though he’d been possessed.

It’s narrated from three different perspectives – that of Julie, JP and DS Alice Moody, leading the investigation. So, was JP telling the truth, did he really know who Harry was and why did he attack him so viciously that he died after being in a coma for several days? What did he whisper in Harry’s ear as he left him at the end of the attack? And why did Julie just sit there watching?

These questions form the focus of the book, as Julie and JP go back over their lives, leading up to that fatal attack. At first it isn’t at all clear what had actually led up to JP’s attack on Harry, but it is clear that he hadn’t had an easy life, growing up with a mother suffering from mental health issues who left him with his shiftless father. Julie and Harry’s marriage was in difficulties, despite his wealth – he was unfaithful and she resorted to alcohol to compensate for his neglect. They’re all flawed characters and not very likeable. Alice Moody is, however, a likeable character, astute and suspicious of JP’s account right from the start.

There are several twists and turns before I began to see the light, after changing my mind about the truth of the matter, first leaning one way then another. But I hadn’t foreseen the final twist. The characters are well-drawn and the book is well paced. I didn’t find it thrilling or chilling after the opening chapter, but I was gripped by the story and I had to read it quickly to find out what really happened.

3 thoughts on “The Confession by Jo Spain”