Today I’m featuring Nemesis by Rory Clements, the third book in his Tom Wilde series, historical fiction set in the Second World War. I’ve read books 1, 2, 4 and 5. It’s probably better to read them in sequence, but I’ve found they read well as standalone books. I am about to start this one.

This was the best day of his life, watching his beloved boy, here in this ancient chamber of light.

Also every Friday there is The Friday 56, hosted by Freda at Freda’s Voice, where you grab a book and turn to page 56 (or 56% of an eBook), find one or more interesting sentences (no spoilers), and post them.

Why was the door open?

He stood on the front doorstep, as his eyes adjusted to the gloom. Across the road, beside the fenced-off garden at the centre of the square, he thought he saw shadowy movement. At first he dismissed it, but then, he heard voices too.

RORY CLEMENTS is a Sunday Times bestselling author. He won the CWA Ellis Peters Historical Award for his second novel, Revenger, and a TV series of the John Shakespeare novels is currently in development.

In a great English house, a young woman offers herself to one of the most powerful and influential figures in the land – but this is no ordinary seduction. She plans to ensure his death . . .

On holiday in France, Professor Tom Wilde discovers his brilliant student Marcus Marfield, who disappeared two years earlier to join the International Brigades in Spain, in the Le Vernet concentration camp in the foothills of the Pyrenees. Wilde secures his release just as German tanks roll into Poland.

Meanwhile, a U-boat sinks the liner Athenia in the Atlantic with many casualties, including Americans, onboard. Goebbels claims Churchill put a bomb in the ship to blame Germany and to lure America into the war.

As the various strands of an international conspiracy begin to unwind, Tom Wilde will find himself in great personal danger. For just who is Marcus Marfield? And where does his loyalty lie?

What do you think? Would you read it? 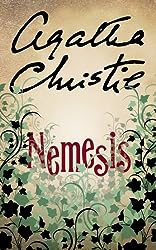 Nemesis first published in 1971, is one of Agatha Christie’s later books written in her eighties. It is the last book she wrote about Miss Marple. There are two more books that were published later, but those were written earlier. It’s not among the best of her books, it’s slow moving, lots of dialogue, lots of recapping of events and clues, lots of moralising and social commentary. It follows on, although it is not a sequel to, A Caribbean Mystery in which Miss Marple met Mr Rafiel.

It’s slow moving because for quite a while Miss Marple doesn’t know what the crime is that she has been asked to investigate. Mr Rafiel, who she met in the West Indies, has left her £20,000 in his will on condition she investigates a certain crime, but doesn’t give her any details. He wrote that she had a natural flair for justice leading to a natural flair for crime and reminded her that the code word is Nemesis. Then she is invited to join a tour of Famous Houses and Gardens of Great Britain at Mr Rafiel’s expense. And off she goes.

Murders as reported in the press have never claimed my attention. I have never read books on criminology as a subject or really been interested in such a thing. No, it has just happened that I have found myself in the vicinity of murder rather more often than would seem normal. (page 90)

Miss Marple has to first of all work out who she can trust.Very gradually through meeting people and talking to them in her usual rather scatty old-lady manner Miss Marple begins to uncover a crime committed years earlier, working largely on intuition. During this process Miss Marple ponders on a number of subjects from wondering how the three witches in Macbeth should be portrayed, during the visit Mr Rafiel had arranged for her with the three sisters at the Old Manor House, to her disapproval of the clothes young women wore. I suspect this was Agatha Christie using Miss Marple as a mouthpiece for her own views – just as this view of rape expressed by  another character, Professor Wanstead, a friend of Mr Rafiel may be her own thoughts too:

Girls you must remember, are far more ready to be raped nowadays than they used to be. Their mothers insist, very often, that they should call it rape. (page 182)

But I wondered about the whole premise of the book – would someone really ask a person to investigate a crime and not give them any details?  It seems highly improbable to me even if Mr Rafiel had wanted Miss Marple to approach the crime with an open mind. And surely if Mr Rafiel really wanted to discover the true facts about the crime he could easily have done so before he died.

I think Nemesis lacks tension and suspense. The characters are rather hard to differentiate, mainly because there are too many, and too many who have no part in the mystery. There are few red herrings to deflect the reader, just unexplained facts that Miss Marple clears up in the last chapters. But I think it is an unusual book and I quite enjoyed it.