Skip to content
Earlier this year I read and loved The Sea Detective, the first Cal McGill book. Cal is an oceanographer using his skills in tracking human bodies and sea-borne objects. So I was really looking forward to reading the second book, The Woman Who Walked into the Sea. Maybe my expectations were too high because I was a bit disappointed – that’s not to say I didn’t like it because I did, but it lacked the pace and complexity of the first book and just didn’t grip my imagination in the same way. Cal is really a secondary character and there is very little sea detection in the story.

Set in an imaginary coastal village of Poltown in the north of Scotland, the story revolves around the main character,Violet who had been abandoned as a new-born baby. An anonymous letter to a social worker reveals that her mother, Megan Bates, had last been seen walking into the sea. Her body had never been found and it had been assumed after her bag and hat had drifted ashore that she had drowned herself. Cal helps Violet with details of the tides and currents which convinces Megan had not committed suicide. She is determined to discover what had happened.

I liked the mystery surrounding Megan and the local people, most of whom have problems/secrets and then there is the ‘local’ mafia and a controversial wind farm proposal. But the appeal of The Sea Detective for me was not just the detective elements but Cal himself and his expertise in the marine environment, the mystery of how the ocean currents and wind speeds affect where things get washed ashore and tracking back to find where they originated.  And I thought this second book was unevenly paced, the action slowed down by long descriptive passages so that the suspense that had been built up drained away and my attention drifted.

So, even though I liked this book, I don’t think it quite lived up to The Sea Detective. There is a third book, The Malice of Waves and I hope that the focus is more on Cal and his sea detective work.

Reading Challenges: Read Scotland 2016 ‘“ by a Scottish author and set in Scotland. 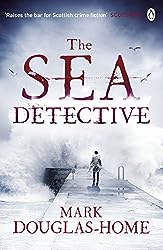 Lovereading.co.uk  sent me a copy of  The Sea Detective by Mark Douglas-Home for review in advance of the publication of the third title in the series The Malice of Waves on 19 May and I’m glad to say that I thoroughly enjoyed it.

It’s one of those books that grabbed my attention right from the start when two young teenage girls from India are sold into the sex trafficking trade, completely unaware of the dangers and terror that awaits them. Then, Edinburgh-based oceanographer, Cal McGill is caught on camera planting a rare wild flower in the garden of the Scottish Environment Minister in a campaign to make politicians aware of the dangers of climate change. Detective Inspector Ryan wants to charge him with vandalism but the minister’s wife wants to keep the plant!

From then on the story gets complicated. It’s more of an investigative story than crime fiction, with several strands to the story, but it’s so well told that I had no difficulty in following all of them: a story of unsolved mysteries both from the present day and from the Second World War, and of two Indian girls, sold into the sex trafficking trade. It’s set mainly in Scotland with a strong sense of place throughout.

The main characters are all fully rounded and complex – Cal McGill works for environmental organisations tracking oil spills using wind speeds and data on ocean currents; DI David Ryan and DC Helen Jamieson are investigating the appearance of severed feet in trainers that had been washed on shore on islands miles apart – tests had revealed that they belonged to the same body; and Basanti, one of the Indian girls, whose resourcefulness saved her life. I especially liked Helen Jamieson, the overweight policewoman, whose boss, Ryan mistakenly thinks is stupid, and the way she deals with him.

The strand that interested me most concerns Cal’s grandfather, from the (fictional) island of Eilean Iasgaich. He had died during the Second World War, washed overboard during a storm, whilst their trawler was patrolling the sea around Norway, one of seven men who had died ‘“ and yet his name had not been included in the island’s war memorial. Cal eventually discovers the truth about what actually happened and how his grandfather met his death.

It’s a gripping and emotional story. I loved it.

The Sea Detective is Mark Douglas-Home’s first book. Before writing books he was the editor of Scotland’s leading daily newspaper, The Herald, and The Sunday Times Scotland. He is the nephew of the late Sir Alec Douglas-Home who was Prime Minister of the UK from October 1963 to October 1964. He lives in Edinburgh.

I’m looking forward to reading his second book, The Woman who Walked into the Sea as well as his third, The Malice of Waves.

Reading Challenges: Read Scotland 2016 – by a Scottish author and set in Scotland.