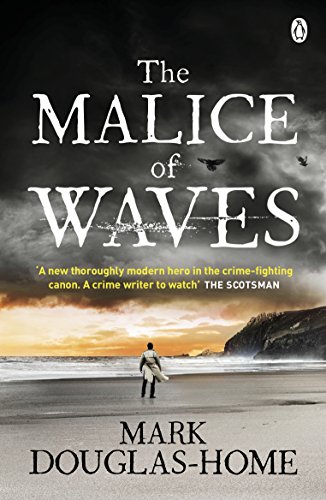 Investigator Cal McGill uses his knowledge of tides, winds and currents to solve mysteries no-one else can.

Five years ago, fourteen-year-old Max Wheeler disappeared from a remote Scottish island. None of the six police and private investigations since have shed any light on what happened.

Unable to let go, Max’s family call in Call McGill. Known as The Sea Detective  – hoping he’ll force the sea to give up its secrets. Yet Cal finds he is an outsider to a broken family, and an unwelcome stranger to a village that has endured years of suspicion.

Cal knows that a violent storm is approaching. But what he doesn’t know is that when it cuts off the island a killer will see their chance …

The Malice of Waves is the third book in Mark Douglas-Home’s The Sea Detective Mystery series and I think it is my favourite. It has an interesting opening scene as Cal sinks a dead pig into the sea off Priest’s Island (a fictional island) to try to work out where the tides, underwater currents and eddies might have taken Max’s body. It’s really a cold case enquiry and there is no new evidence to help him discover the truth. Each year on the anniversary of Max’s disappearance, his family hold a memorial service on the island. His father is convinced that the villagers are complicit in his son’s murder.

The Malice of Waves is just as much a story of the villagers as it is of the Wheeler family and the setting of Priest’s Island, beautifully described by Douglas-Hume, is also a major part of the book. The location came to life as I read the book, making it easy to visualise the scenes. It’s well written and easy to read, leading me effortlessly into the mystery. The police are also present on the island as DS Helen Jamieson is staying undercover in the village, helping Cal with his investigations. I like the insight into Helen’s unspoken feelings for Cal. Both her and Cal are strong, independent characters and the other characters are well depicted too.

Interwoven into the main story is ‘Pinkie’ Pyke’s story. He is a collector of birds’ eggs, but his interest is into rare erythristic bird eggs, those with pink or reddish colouring and there is a raven’s’ nest on the island.

The Malice of Waves is a fascinating book, not only an engrossing mystery, but also a study of the sea, of birds’ eggs (I had never heard of erythristic eggs before), of obsessions and of the way people cope, or don’t cope with grief. I loved it.

8 thoughts on “The Malice of Waves by Mark Douglas-Home”