I regularly borrow books from the library, although I haven’t written about them for a few months. These are the ones I have on loan at the moment:

The Pure Gold Baby by Margaret Drabble. This novel was on the mobile library van shelves and caught my eye because I’ve enjoyed the other books by her that I’ve read. Anna is a child of special, unknowable qualities. She is happy, always willing to smile at the world around her, but she also presents profound challenges. For her mother Jess, still in her early 20s, her arrival will prove life-transforming.

Winter King: The Dawn of Tudor England by Thomas Penn, non-fiction about Henry VII. I reserved this after FictionFan recommended it, describing it as: ‘very detailed but well written and not too academic in tone‘. Hilary Mantel is quoted on the cover: ‘Compelling … Fascinating‘. With two such recommendations how could I resist reading it? So I was delighted to find the library has a copy.

The Last Ragged Breath by Julia Keller, the 4th book in her Bell Elkin’s mystery series set in West Virginia. I haven’t read any of her books before but I was reading about her latest book on Kay’s Reading Life and found this book on the shelves when I went to the library yesterday. Royce Dillard doesn’t remember much about the day his parents-and one hundred and twenty-three other souls-died in the 1972 Buffalo Creek disaster. But now Dillard, who lives off the grid with only a passel of dogs for company, is fighting for his life one more time: He’s on trial for murder.

Happy Old Me:How to Live a Long Life and Really Enjoy It by Hunter Davies. This is another book I reserved. Davies is the editor of The John Lennon Letters (which I’m currently reading) and the author of Wainwright: The Biography (which my husband is currently reading and I want to read it too). This is his third autobiographical book, described on the book sleeve as ‘part memoir, part self-help … a moving, uplifting and often amusing account of one year in Hunter Davies’ life, navigating bereavement and finding hope for the future.‘ I’m currently reading it and so far (up to chapter 4) I’m loving it.

Margaret Drabble’s latest book, The Dark Flood Rises explores the ending of life, the nature of aging, and life and death. But it is by no means depressing or morbid. It’s told from a number of viewpoints, centring around Fran (Francesca) Stubbs, set against a backdrop of rising floods in Britain and in the Canaries, both of the influx of immigrants arriving by boat to the Canaries from Africa and of the effect of the tremor off the small Canary Island of El Hierro on the tides.The ‘dark flood ‘ is also used to refer to the approach of death.

Fran, now in her seventies, is an expert on housing for the elderly. She keeps herself very busy, acting as a carer of sorts and cooking meals for her ex-husband Claude, and travelling around the country attending conferences on care for the elderly. She visits old friends and her daughter in the West Country. She keeps in touch with her son, Christopher, as he deals with the sudden death of Sara, his girlfriend, and is visiting friends in Lanzarote.

But this book is not plot-focused – it ponders the questions of what is a ‘good’ or even an ‘heroic’ death, the morality of suicide and in contrast the desire for the human race to go on living at all costs. It focuses on personal relationships, on love, on the vagaries of memory, on the ordinary, everyday aspects of life and on the ‘heroism’ needed for old age.

I liked it very much. It’s densely layered, thought provoking and moving. It’s a book to re-read.

And, incidentally I was intrigued to find that the pop artist, Pauline Boty who is mentioned in the last book I read, Autumn by Ali Smith, is also mentioned in The Dark Flood Rises when Sara’s death reminds Christopher of Boty who had died at the early age of twenty-eight.

My thanks to NetGalley and the publisher, Canongate Books, for letting me have an advance copy. The Dark Flood Rises is due to be published on 3 November 2016.

I began reading The Pattern in the Carpet: A Personal History With Jigsaws in December and finished it this morning. It took me a long time not because it’s difficult reading (it isn’t) but because I only read short sections each day – I often read non-fiction like that. 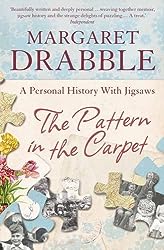 It is not the book she meant to write and it is not the book I expected to read. I enjoyed parts of immensely – those parts about her childhood, and life at Bryn, her grandparents’ house in Long Bennington and about her beloved Aunt Phyl (Phyllis Boor) and of course those parts about jigsaws, both personal and historical, about mosaics (looking at them as a form of jigsaw), the history of children’s games and puzzles and amusements. She does ‘spiral off in other directions’ which meant in parts it lacks a clear structure in a sort of ‘stream of conciousness’ style, particularly in her reminiscences and nostalgia about life (reproduced in some jigsaws) in a rural community that no longer exists.

I noted down a few points she made about jigsaws:

And, of course, reading this book has made me get out a jigsaw to do. This is a Thomas Kinkade jigsaw: Sunday Evening Sleigh Ride (1,000 pieces).

I don’t think I’m a jigsaw addict, in the same way as I am a book addict, after all I do just a few jigsaws now and then, whereas reading is a constant and I feel lost if I don’t have a book on the go. And you may have noticed (from the side bar) that I am not currently reading a book! Time to find the next one to read …

I wrote about the beginning of Margaret Drabble’s first novel A Summer Bird-Cage last Friday. I finished reading it only four days ago and already my memory of it is fading. I really should have made notes or at least marked pages with post-it notes, because there were so many passages I wanted to remember, but I read it too quickly to pause long enough for that.

The title comes from this quotation from John Webster’s play The White Devil:

‘Tis just like a summer bird-cage in a garden: the birds that are without despair to get in, and the birds within despair and are in a consumption for fear they shall never get out.

I think  this sums up my impression of the book as a whole – it’s about dissatisfaction and not knowing what you want, about family relationships (sisterly rivalry in particular), and the nature of marriage – the cages we live within. Drabble illustrates this through her depiction of two sisters, both on the brink of changes in their lives – the younger sister Sarah, recently down from Oxford University and completely at a loss what to do with her life, and Louise, the ‘beautiful’ one, marrying for money not for love, equally floundering and mixed-up about her life.  Sarah, the narrator, can’t understand why Louise has  married the unlikeable Stephen and it soon becomes apparent that Louise is having an affair with John Connell, an actor.

The two sisters do not get on. Sarah says:

I used to laugh at her with my school-friends, to borrow her clothes without asking, and to steal her books. Once I read her diary. She would have read mine, had I kept one. In the end she taught me the art of competition, and this is what I really hold against her: I think I had as little desire to outdo others in my nature as a person can have, until she insisted on demonstrating her superiority. She taught me to want to outdo her.  And when, occasionally, I did so, her anger hurt me, but as I had won it by labour from indifference, I treasured it. And when, finally, I took over one of her men at Oxford, the game was out in the open, I thought, for the rest of our lives. (page 103)

Their mother is also dissatisfied with her life, who is not at all happy when Sarah decides she wants to live in London, sharing a flat with her friend, Gill, not liking the idea of her not having a ‘proper job’.  She admits. however, that as it’s Sarah’s own life and grudgingly says that no one can accuse her of trying to keep her at home – which, of course, she is. Sarah describes her as

… poor brave twittering Mama, pretending everything has been so lovely, ignoring the facts because they were the only ones she knew. (page 21)

Whilst not a lot as regards plot happens in this short novel, it contains many ideas, attitudes and character studies. And it’s beautifully written, such as in this passage:

It was a wonderful blue cold day, with the last yellow leaves reprieved in the terrace of plane trees by the bus stop: almost one of those aqueous and lunar days when everything is charged with its own clarity. The colours of the houses and the brick were glowing and profound, and the small children playing in the streets looked as though they were on their way to an entrancing future. (page 81)

I think I’d like to re-read it one day.

Note: the cover shown above is my own copy, a Penguin edition, reprinted in 1967, which I bought secondhand.

Last Friday I quoted the opening sentences of Life Support by Tess Gerritsen, which was going to be the next book I read. I did read on for a couple of chapters but had to stop as I was just not in the mood for reading a medical thriller set in a hospital – too close to the bone! I fancied reading something less disturbing, so I took A Summer Bird-Cage by Margaret Drabble down from the bookcase and began to read that:

I had to come home for my sister’s wedding. Home is a house in Warwickshire, and where I was coming from was Paris. I was keen on Paris, but will refrain from launching into a description of the Seine. I would if I could, but I can’t. (page 7)

A Summer Bird-Cage was Margaret Drabble’s first novel. It was first published in 1963 and is set at the in the early 1960s, about the lives of two sisters – Sarah, the narrator who has just graduated from Oxford University and is wondering what to do with her life, and her beautiful sister Louise who at the start of the book is about to marry, Stephen, a rich novelist. From what I’ve read so far, neither of them seem happy and there is definitely tension between them.

Interesting I think, and I’m wondering if it maybe a bit autobiographical – Margaret Drabble is the younger sister of A S Byatt. Maybe this sentence was personal, comparing the two sisters, when Sarah says – ‘As far as tags go she is grande dame where I am jeune fille, and she leads all her life to match it.’ Or maybe I’m reading too much into that.

Book Beginnings on Friday is hosted by Katy at A Few MorePages.