In the early hours of Saturday 17 December 2011, Zoe Nolan, a nineteen-year-old Manchester University student, walked out of a party taking place in the shared accommodation where she had been living for three months.

She was never seen again.

Seven years after her disappearance, struggling writer Evelyn Mitchell finds herself drawn into the mystery. Through interviews with Zoe’s closest friends and family, she begins piecing together what really happened in 2011. But where some versions of events overlap, aligning perfectly with one another, others stand in stark contrast, giving rise to troubling inconsistencies.

Shaken by revelations of Zoe’s secret life, and stalked by a figure from the shadows, Evelyn turns to crime writer Joseph Knox to help make sense of a case where everyone has something to hide.

Zoe Nolan may be missing presumed dead, but her story is only just beginning

True Crime Story is Joseph Knox’s fourth novel, his first standalone. Previously I’ve read two of his Detective Aidan Waits novels, The Smiling Man and The Sleepwalker, which I loved – they’re both brilliant, dark and violent urban noir novels. They’re also amongst the most complicated books that I’ve ever read. So my expectations for True Crime Story were very high, but, I’m sorry to say, I was disappointed. In fact I almost abandoned it several times, until about the 50% mark when I realised that I had to read on because I wanted to know what had happened to Zoe.

Despite the title this is not a nonfiction true crime story, nor a mix of fact and fiction, it is a novel and it includes the author, Joseph Knox, as one of its characters. It has a story within the story – made up of emails to and from Knox and another writer (fictional) Evelyn Mitchell. Evelyn is writing a book about the disappearance of a student at Manchester University, Zoe Nolan. Her book is a collection of the interviews she carried out with Zoe’s family and friends seven years after Zoe’s disappearance, which she sends to Joseph Knox as she collates them, and asks for his advice.

Initially I found this rather confusing but I gradually worked out their relationships and characters, although it is repetitive and reads as a long session of interviews about the same events as seen through each character’s perspective. For me, this makes it fragmentary and in parts disjointed, slows down the action, and lessens the tension and suspense even as the facts about the mystery emerge, including what happens to Evelyn herself.

However, many other readers love this book, so I am in the minority. It has had rave reviews and was short listed for this year’s Theakston Old Peculiar Crime Fiction Novel of the Year, an award that celebrates excellence, originality, and the very best in crime fiction from UK and Irish authors. You may enjoy it more than I did!

My thanks to the publishers Transworld Digital for a review copy via NetGalley.

‘He said he didn’t remember killing them…’

As a series of rolling blackouts plunge the city into darkness, Detective Aidan Waits sits on an abandoned hospital ward, watching a mass murderer slowly die. Transferred from his usual night shift duties and onto protective custody, he has just one job…

To extract the location of Martin Wick’s final victim before the notorious mass murderer passes away.

Wick has spent over a decade in prison, in near-total silence, having confessed to an unspeakable crime that shocked the nation and earned him the nickname of The Sleepwalker.

But when a daring premeditated attack leaves one police officer dead and another one fighting for his life, Wick’s whispered last words will send Waits on a journey into the heart of darkness…

Manipulated by a reticent psychopath from his past, and under investigation from his new partner, Detective Constable Naomi Black, Waits realises too late that a remorseless contract killer is at work.

Can Aidan Waits solve his last case before fleeing justice?

Or will his name be next on the hit list?

The Sleepwalker by Joseph Knox is the third Detective Aidan Waits novel. It has to be the most complicated book that I’ve read in a very long time. Two years ago I read the second book, The Smiling Man, even though I hadn’t read the first one, Sirens, and loved it, so I was keen to read the third one. It certainly didn’t disappoint me and although I think the books read well as stand-alones, it would probably be best to read them in order. To say that Waits has troubled background is an understatement. He is a disturbed and complex character, other police officers don’t trust him or want to work with him.  He plays very close to the edge and has little regard for his own safety.

The Sleepwalker is dark, violent and absolutely brilliant. I just didn’t want it to end and at the same time I just had to know what happened next. There are so many strands that you have to keep in mind, so many characters to sort out where they fit into the story and it’s all so cleverly linked together. You think you have it sorted and then you realise there’s more to come. It’s perfectly paced throughout, culminating in an astounding and shocking conclusion that had me reeling.

Quite simply, I loved it.

Yesterday I went to my favourite bookshop Barter Books, one of the largest secondhand bookshops in Britain. This is where you can ‘swap’ books for credit that you can then use to get more books from the Barter Books shelves.

River of Darkness by Rennie Airth – I was hoping to find this book as Cafe Society recommended it. It’s the first book in his John Madden series. Inspector John Madden of Scotland Yard investigates the murder of a family in the post-World War I British countryside. A veteran of the war, Madden immediately recognizes the work of a soldier, but discovering the motive will take longer.

Ruling Passion by Reginald Hill. I always check to see if there are any of his books on the shelves that I haven’t got/read, so I was pleased to find this one. It’s the third Dalziel and Pascoe book in which Pascoe finds his social life and work uncomfortably brought together by a terrible triple murder. Meanwhile, Dalziel is pressuring him about a string of unsolved burglaries, and as events unfold the two cases keep getting jumbled in his mind.

Beryl Bainbridge is another author whose books I always look out for, and this visit I found Every Man for Himself. This novel is about the voyage of the Titanic, on its maiden and final voyage in 1912.

Sirens by Joseph Knox. I wasn’t looking for this book, or for books by Knox, but it caught my eye as I browsed the shelves and I remembered that earlier this year I’d read  and thoroughly enjoyed The Smiling Man. Set in Manchester, Sirens is Knox’s debut book featuring DC Aidan Waits. Young women are lured into enigmatic criminal Zain Carver’s orbit and then they disappear.

Once more I’m torn between reading these as soon as possible, or reading from my TBR shelves and review copies from NetGalley. It’s a dilemma 🙂 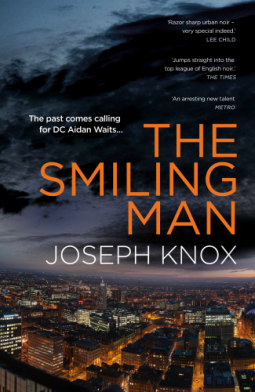 Disconnected from his history and careless of his future, Detective Aidan Waits has resigned himself to the night shift. An endless cycle of meaningless emergency calls and lonely dead ends. Until he and his partner, Detective Inspector Peter ‘Sutty’ Sutcliffe, are summoned to The Palace, a vast disused hotel in the centre of a restless, simmering city.

There they find the body of a man. He is dead.

And he is smiling.

The tags have been removed from the man’s clothes. His teeth filed down and replaced. Even his fingertips are not his own. Only a patch sewn into the inside of his trousers gives any indication as to who he was, and to the desperate last act of his life…

But even as Waits puts together the pieces of this stranger’s life, someone is sifting through the shards of his own.

When the mysterious fires, anonymous phone calls and outright threats escalate, he realises that a ghost from his own past haunts his every move.

And to discover the smiling man’s identity, he must finally confront his own.

I wasn’t sure I wanted to read this book, the second Aidan Waits novel, as I haven’t read the first book, Sirens. But I was interested by the description of The Smiling Man and the fact that the books are set in Manchester. So, I thought I’d see what it’s like – and I needn’t have worried as it reads well as a stand-alone book. Be aware though (if this bothers you), there are some violent scenes, and one strand of the story concerning a particularly loathsome and brutal character called Bateman and an eight year old boy and his little sister is very chilling.

Aidan Waits is a Detective Constable working night shifts with Detective Inspector Peter Sutcliffe, known as Sutty. They don’t like each other – at all. The only thing they have in common is that they each try to make things as difficult as possible for the other. But strangely their partnership gets results.

The book description sets out the main strand of the plot  –  the police investigation of the death of the ‘Smiling Man‘ at disused hotel, The Palace, the question of his identity and the motive for killing him, but there are various other strands woven into the narrative that make this a fascinating and complex novel. Waits and Sutty are plain clothes detectives on patrol duty in the city dealing with fires set in steel dustbins when they’re called to Owens Park, student halls of residence, to a complaint of sexual harassment and threats to post a sex video on the internet. Then there’s the mystery of the death of Cherry, a sex worker fished out of the Manchester Canal, and the further complications caused by the owners of the hotel, Natasha and Freddie, at loggerheads over the sale of the hotel.

But overarching the cases he is working on is Waits’ troubled background, some of which I assume was in Sirens. In this book we learn so much about what has made him into such a disturbed and complex character and why other police officers don’t trust him or want to work with him. He plays very close to the edge and has little regard for his own safety.

The location is superb – Manchester in a heatwave – students taking degree courses they’ll never pay off, muggings and drug pushers and the ‘missing missing’ – people who disappear but are never reported missing, so they’re not in any databases. No one is looking for them and if they’re found dead there’s no way of finding out who they were. It’s as they they had dropped off the face of the earth, almost as though they had never been born. Or, as in the case of the ‘Smiling Man‘, their identity has been deliberately obfuscated.

I was totally convinced by Knox’s storytelling, fully absorbed in the characters and intrigued by the various strands, only gradually seeing how they  were connected. I had little idea about the culprit until the end. Quite simply, I loved this book and will read more by Joseph Knox, starting with Sirens.