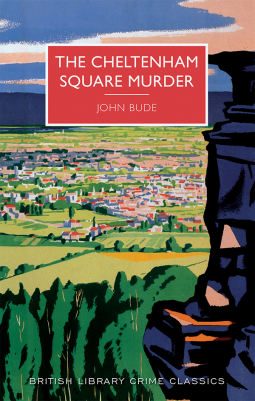 In the seeming tranquillity of Regency Square in Cheltenham live the diverse inhabitants of its ten houses. One summer’s evening, the square’s rivalries and allegiances are disrupted by a sudden and unusual death ‘“ an arrow to the head, shot through an open window at no. 6.

Unfortunately for the murderer, an invitation to visit had just been sent by the crime writer Aldous Barnet, staying with his sister at no. 8, to his friend Superintendent Meredith. Three days after his arrival, Meredith finds himself investigating the shocking murder two doors down. Six of the square’s inhabitants are keen members of the Wellington Archery Club, but if Meredith thought that the case was going to be easy to solve, he was wrong’¦

The Cheltenham Square Murder is a classic example of how John Bude builds a drama within a very specific location. Here the Regency splendour of Cheltenham provides the perfect setting for a story in which appearances are certainly deceiving.

The Cheltenham Square Murder by John Bude was first published in 1937. Previously I’ve read John Bude’s second book- The Lake District Murder, a police procedural, showing in intricate detail how detectives investigated a crime, particularly in rural areas in the mid 1930s, in which I found his calculations of the times and distribution of petrol deliveries a bit difficult to follow.

But by the time he wrote The Cheltenham Square Murder Bude’s style had become more refined and I found it much easier to follow, whilst still writing in detail about the suspects and how the crime could have been and was committed. It is quite complicated, a real puzzle to solve, first of all just how the murder was carried out and secondly who out of the several suspects was the murderer.

There is a plan of the fictional Regency Square showing the layout of the ten houses and their occupants. Bude describes the residents giving a good idea of their personalities and relationships. As in all communities, they don’t all get on, ‘outwardly harmonious yet privately at loggerheads’. Those who belong to the Wellington Archery Club are keen, even fanatically keen archers, so immediately they are suspects.

It is fortunate for the local police that Superintendent Meredith from the Sussex County Constabulary is staying in the Square and helps Inspector Long unravel the mystery, but not before another there is a second victim, again murdered with an arrow in the head.

It’s a slow-paced mystery, both Meredith and Long spend much time working out how the murder was committed and Bude drops in several red herrings to confuse matters as first one then another of the residents comes under suspicion. I enjoyed trying to work it out, but although I had an idea about the guilty person I couldn’t see how the murders had been achieved until the method was revealed.

Martin Edward’s introduction gives a brief biography of John Bude, whose real name was Ernest Carpenter Elmore (1901 – 1957). For a time he was a games master at St Christopher School in Letchworth where archery was one of the pupils’ activities.

My thanks to the publishers, Poisoned Pen Press in association with the British Library, and NetGalley for my copy of this book which has an introduction by Martin Edwards.

I first came across John Bude’s books nearly a year ago on Martin Edward’s blog Do You Write Under Your Own Name and thought they looked very interesting. His books are amongst those published by the British Library – reprints of unknown and undiscovered murder mysteries written in the thirties.  John Bude, whose real name was Ernest Carpenter Elmore, was writing in the Golden Age of detective fiction in the years between the two world wars. In 1953 he became one  of the founding members of the Crime Writers’ Association.

Anyway I made a mental note about the name and it lodged in the back of my mind until this September when I was in the Lake District and came across The Lake District Murder in the tourist information office in Glenridding on the shores of Ullswater. It has a striking cover, reproduced from a London & North Eastern Railway travel poster dating from the 1920s, showing a small steamer boat sailing on Ullswater, surrounded by the hills and mountains of the Lake District.

The artist was John Littlejohns, who was born in Devon in 1874. He was a painter, illustrator, writer and teacher. As we had just been on a boat trip on Ullswater, in the Lady of the Lake (originally a steamboat), this immediately caught my eye.

The Lake District Murder as Martin Edwards writes in the introduction is ‘a world away from the unreality of bodies in libraries and cunningly derived killings on transcontinental trains.’ It is a police procedural, showing in intricate detail how the detectives investigate a crime. In this case a body is discovered in a car outside a lonely garage on a little used road. At first it appears that Jack Clayton one of the garage owners had committed suicide, but there are a couple of clues pointing to murder and when Inspector Meredith discovers that Clayton was planning to marry and move abroad it turns into a murder investigation. But what is the motive for murder and as everyone seems to have an alibi, who had the opportunity to kill Clayton?

This book really takes you back in time. It was first published in 1935, which means that police methods of investigations particularly in rural areas was very different. Inspector Meredith uses buses or trains or travels the local roads on a motor cycle with a side car and pops into the local post office to use the telephone. It’s a slow process.

Having recently visited the Northern Lakes, I was fairly familiar with the landscape and could follow the action quite easily, but what I did find difficult was following the calculations Meredith and his colleagues carried out to work out petrol deliveries to the local garages, the lorries’ loads and the petrol storage capacities at the various garages. Inspector Meredith is a likeable character, with a happy home life, although his wife thought the police force made more than enough demands on his time  and tried to discourage their son’s interest in police affairs.

The Lake District Mystery is Bude’s second mystery novel. His first was The Cornish Coast Mystery,  and the third is The Sussex Downs Mystery (due to be released 27 October) both also reprinted by the British Library.