Agatha Christie’s Appointment with Death, set in the Middle East was first published in 1938 after her final pre-war visit to the area. It seemed right to read this book straight after I’d finished reading Come, Tell Me How You Live in which Agatha Christie wrote about her life on archaeological expeditions in Syria with her husband Max Mallowan.

The novel begins in Jerusalem where the Boyton family are sightseeing. There are two stepsons, one is married, a daughter and a step daughter. Mrs Boynton is a malignant and malicious tyrant who enjoyed exercising her power over her family, who all hated and yet obeyed her. Dr Gerard, a French psychologist, also a tourist remarks that

… she rejoices in the infliction of pain – mental pain, mind you, not physical. That is very much rarer and very much more difficult to deal with. She likes to have control of other human beings and she likes to make them suffer.

The Boyntons and Dr Gerard travel on through the Judean desert to Petra. Also in the group are Jonathan Cope, a family friend, Sarah King, a newly qualified doctor, Lady Westholme, a member of Parliament and Miss Annabel Pierce, a former nursery governess. The beginning of the book is taken up with relating their journey to Petra and the complicated relationships between the characters. It comes to a climax when Mrs Boynton is found dead.

The remainder of the book covers the investigation into her death. Colonel Carbury is in charge and although it appears that Mrs Boynton, who suffered from heart trouble had died overcome by the heat and strain of travelling, he is not satisfied and he has an idea that the family killed her. He enlists the help of Hercule Poirot, who was also in Jerusalem at the same time as the Boyntons and had overheard part of a conversation, ‘You do see, don’t you, that she’s got to be killed.’ He was sure he would recognise that voice again – and he did.

Poirot is his usual confident (arrogant) self, convinced he can solve the mystery and he does through questions, analysis and psychological reasoning. I didn’t work it out myself though.

This is a quick, easy read, with a lot of dialogue in a relatively short book (less than 200 pages). I enjoyed it, although it’s not one of my favourite Agatha Christie books.

I’m including it in Bev’s Color Coded Challenge as the main colour of the cover of my copy is brown. It’s one of the remaining few novels I have left to read for Kerrie’s Agatha Christie Reading Challenge.

My choice this week is Appointment with Death by Agatha Christie, one of the few novels of hers that I haven’t read. It’s one of the earlier Poirot books, first published in 1938. It begins: 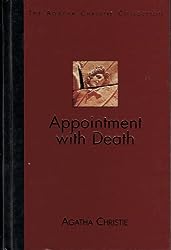 The question floated out into the still night air, seemed to hang there a moment and then drift away down into  the darkness towards the Dead Sea.

Hercule Poirot paused a minute with his hand on the window catch. Frowning, he shut it decisively, thereby excluding any injurious night air! Hercule Poirot had been brought up to believe that all outside air was best left outside, and that night air was especially dangerous to the health.

Of course, this has me wondering who ‘she’ is, why she has to be killed and who is talking.

I don’t remember reading before about Poirot’s upbringing – intriguing to think of him as a child!