Over several years I’ve been reading my way through Agatha Christie’s books and short stories. I’ve read all her detective/mystery novels and some of her short story collections. In an attempt to read more of the short stories I’ve decided to read some each Sunday, beginning with the stories collected in Miss Marple and Mystery. 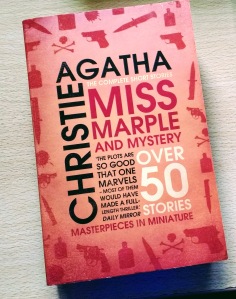 This collection contains 55 stories, 20 of them featuring Miss Marple. There is an Short Story Chronology in the Appendix with a table aiming to present all Agatha Christie’s short stories published between 1923 and 1971, listed in order of traced first publication date. Counting how many there are in total is a difficult task – some stories that first appeared in weekly or monthly magazines were later  re-worked and became chapters in a larger work, some in Partners in Crime were sub-divided into smaller chapters, 13 were re-worked into the episodic novel, The Big Four, and some were rewritten so substantially that they appear separately in different books!

I’ve read some of these in other short story collections but there are still many I haven’t read.

The Girl in the Train is one I haven’t read before. It was first published in Grand Magazine in February 1924 and was adapted as one of the Agatha Christie Hour drama series for by Thames Television in 1982 as part of their ten-part programme. It’s a very short story that also appears in The Listerdale Mystery collection of short stories.

George Rowland is the heir to his Uncle William’s wealth but is left without a job or a home when William throws him out on his heel. On a whim George Rowland decides to catch a train down to Rowland’s Castle, a village which happens to bear his name. A beautiful girl bursts into his compartment, frantically begging to be hidden.  She gives him a package saying it is the key to everything and he is to guard it with his life. Jumping out of the train at the first stop she tells him to follow the little man with a small dark beard getting on the train. His life changes dramatically as he follows her instructions.

It’s a bit of nonsense really, in the same vein as Christie’s Tommy and Tuppence stories. A quick easy read, but entertaining nevertheless and possibly the first of books entitled The Girl …

8 thoughts on “Short Stories on Sunday”