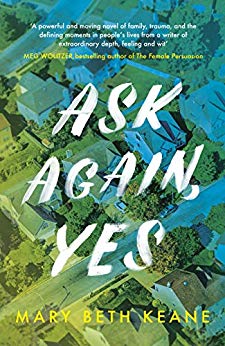 Gillam, upstate New York: a town of ordinary, big-lawned suburban houses. The Gleesons have recently moved there and soon welcome the Stanhopes as their new neighbours.

It’s left to their children – Lena’s youngest, Kate, and Anne’s only child, Peter – to find their way to one another. To form a friendship whose resilience and love will be almost broken by the fault line dividing both families, and by the terrible tragedy that will engulf them all.

A tragedy whose true origins only become clear many years later . . .

A story of love and redemption, faith and forgiveness, Ask Again, Yes reveals the way childhood memories change when viewed from the distance of adulthood – villains lose their menace, and those who appeared innocent seem less so.

A story of how, if we’re lucky, the violence lurking beneath everyday life can be vanquished by the power of love.

As I was reading the first part of Ask Again, Yes I thought this is a family saga that I’m really going to enjoy about two young families as they get to know each other and their children are born and grow up together, from 1973 to the present day. But gradually as I read on my enthusiasm and interest began to fade and I’m sad to say that the story just seemed to drag on from the initial violent event to more desperate and traumatic situations.

I think my reaction is because of the length, the slow pace over such a long period of time. It is full of drama and it is tragic. But it is also like reading an over-long description of the characters’ lives, one that I thought would never end. Having said that it is dramatic, it is mainly a character-led novel rather than being plot driven, dealing with mental illness, cancer, adultery, and alcoholism. Ultimately, it is a book about love – but not one that I enjoyed.