I’ve enjoyed all of Tracy Chevalier‘s books that I’ve read so far, so it was no surprise to me. to find that I loved her latest book, A Single Thread. 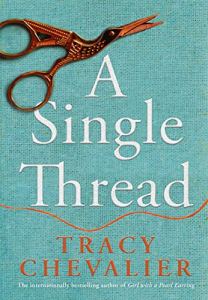 This is historical fiction, a mix of fact and fiction, set mainly in Winchester in the 1930s. It is a a simple straightforward story, beautifully written, with the emphasis on everyday life. The main character is Violet Speedwell, a single woman of 38, regarded by society as a ‘surplus woman’ unlikely to marry  because her fiancé, Laurence was killed in the First World War. The 1921 census revealed that there were 1.75 million more women than men in the UK.  Surplus women were patronised and were expected to stay at home looking after their elderly relatives, but at the age of 38 in 1932 Violet decides to leave her overbearing mother and move on her own to Winchester. There is a lot of information about embroidering cushions and kneelers for the the Choir stalls and Presbytery seats in the Cathedral and about bell-ringing, both of which formed integral parts of the book.

Violet knew nobody in Winchester, but whilst looking round the Cathedral she came across a group of women, calling themselves the Winchester Cathedral Broderers, dedicated to embroidering hassocks and cushions for the seats and benches. She joins the group, led by Miss Louisa Pesel (a real person) and the stern Mrs Biggins and as well as learning to embroider, she makes new friends. One of these friends is Gilda, who introduces her to two of the bell-ringers, Arthur, a older married man and a younger, unmarried man, called Keith.

She is determined to be independent, not relying on her mother or her brother to support her. So she finds a job as a typist and takes a room in house shared with two other women and her landlady, Mrs Harvey, who discourages male visitors other than family. The difficulties of being independent are brought home to Violet as she struggles on her wages to pay for her lodgings, laundry and coal, let alone feed herself. And then her mother is admitted to hospital and she has to decide whether to return home to look after her.

The characters are drawn with fine detail and the descriptions of the settings, particularly in the Cathedral are so clear that I could easily visualise both the building and its interior. I particularly liked the details about the embroidery and the stitches used. As the Nazi Party and Hitler rise to power in Germany, the use of fylfots in the embroidery designs are mistaken for swastikas which are ancient symbols of light and life and good fortune.

The book gives an detailed look at life between the two World Wars. It has a slow gentle pace following Violet’s new life, but there is a sense of change on the horizon as her relationship with Arthur develops.  It gives a lively picture of the difficulties of life for unmarried women, including Gilda and Dorothy’s unconventional relationship that they have to keep secret to avoid the prejudice this would attract. And there is an indication of the sense of unease in society as the threat of another war loomed.

It is obvious throughout the book that Tracy Chevalier has meticulously carried out her research and in the acknowledgements she lists a number of the many resources she has used, including details of Louisa Pesel’s embroidery work as well as the history of Winchester Cathedral, bell-ringing, 1930s women and life in Britain in the 1930s .

14 thoughts on “A Single Thread by Tracy Chevalier”