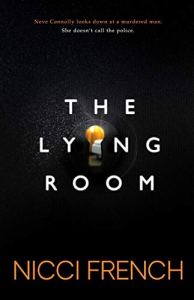 Neve Connolly looks down at a murdered man. She doesn’t call the police.

A trusted colleague and friend. A mother. A wife. Neve Connolly is all these things. She has also made mistakes; some small, some unconsciously done, some large, some deliberate. She is only human, after all.

But now one mistake is spiralling out of control and Neve is bringing those around her into immense danger. She can’t tell the truth. So how far is she prepared to go to protect those she loves? And who does she really know? And who can she trust?

A liar. A cheat. A threat. Neve Connolly is all these things. Could she be a murderer?

I finished reading this book a few weeks ago and my lasting memory of it is that I couldn’t believe Neve’s reactions to finding Saul, her lover, who is also her boss, lying dead on the floor of his apartment his head framed by a pool of blood, a big hammer lying next to him. She sits down to think what what would happen if she phoned the police – about the effect it would have on her family, but most of all on her troubled teenage daughter, Mabel who has had problems with drug addiction.

So, she does not phone the police. Instead she sets about deep cleaning the whole place to remove any evidence that she has been there, including pulling the sheets off the bed, the cover off the duvet and putting them in to wash, along with towels. But she also took off her bangle, as put on kitchen gloves – and left it there. When she returned to retrieve it, it wasn’t there and the hammer had gone too – who had been in the apartment after she left?

Neve is an expert liar and the book is full of lies and secrets. It is compelling reading – the tension rises as she lurches from one potentially disastrous situation (largely of her own making) to the next. I found her intensely annoying as her lying leaves her with apparently nowhere to turn – she is stuck in her own web of lies – and wonders who could have killed Saul.

Add in Detective Chief Inspector Alastair Hitching, who turns up repeatedly in Colombo-style asking her more questions and Saul’s wife, Bernice, who tells her she knew her husband had been having an affair and asks her if she knows who it might have been with. Neve wonders whether Bernice was really asking for her help or telling her that she knew it was her. All the time she is terrified, desperate to keep her affair a secret.

I enjoyed this book, once I’d suspended my disbelief at the implausibility of Neve’s actions. But I would have loved it if some of the detail of the routines everyday life had not been so overwhelming present all the time. There are a lot of characters and along the way I suspected that many of them could have been the killer, except for the real culprit, which in a way was both satisfying and an anti-climax. So, I have mixed feelings about this book – I enjoyed it but at the same time I thought it rather far-fetched and too long, with many passages devoted to unnecessary detail that slowed down the action.

8 thoughts on “The Lying Room by Nicci French”