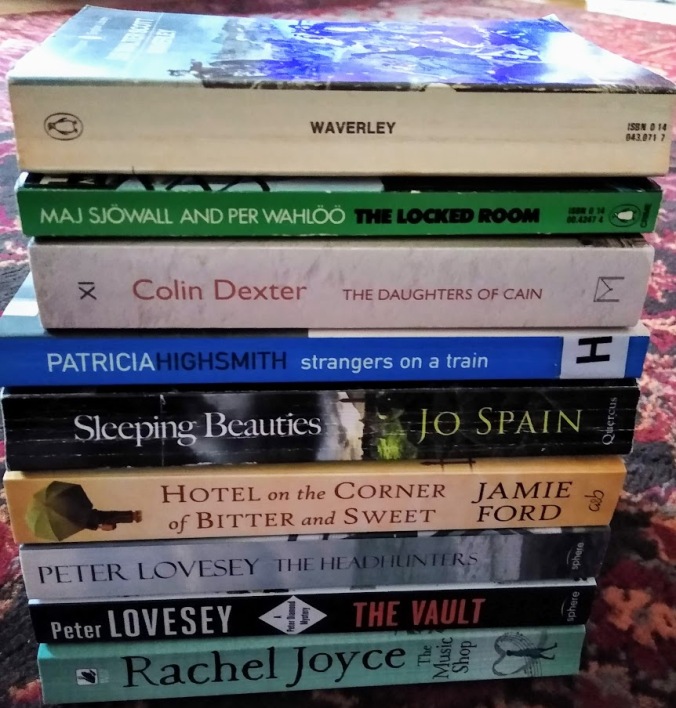 Yesterday I brought this little pile of books home from Barter Books in Alnwick, my favourite bookshop.

From top to bottom they are:

Waverley by Sir Walter Scott, his first novel, first published anonymously in 1814. It is set in the Jacobite Rebellion of 1745 and tells the story of Edward Waverley, an idealistic daydreamer whose loyalty to his regiment is threatened when they are sent to the Scottish Highlands. I’m inspired to read this by a recent visit to Abbotsford, Scott’s home in the Scottish Borders.

The Locked Room by Maj Sjowall and Per Wahloo, the eighth in the Martin Beck series – once more I’ve plunged into a series without reading the earlier books. But it appears that shouldn’t matter as each book is focused on one particular case. I’m not sure what to expect as the blurb on the back says it transforms the police force into the police farce.

The Daughters of Cain by Colin Dexter, the eleventh Inspector Morse mystery. Morse must solve two related murders — a problem complicated by a plethora of suspects and by his attraction to one of the possible killers. I’ve read several of the Morse books, so far, so I was pleased to find another one I haven’t read.

Strangers on a Train by Patricia Highsmith, a book I’ve wanted to read for a long time. Hitchcock’s 1951 film is based on this book. Guy Haines and Charles Anthony Bruno meet on a train. Bruno manipulates Guy into swapping murders with him. “Some people are better off dead,” Bruno remarks, “like your wife and my father, for instance.”

Sleeping Beauties by Jo Spain, the third Inspector Tom Reynolds novel set in Dublin and the surrounding areas. I’ve read the fourth book and have copies of the first two to read, so I was pleased to find this book on the shelves. Five bodies are found in woodland and a young woman is missing. A search is under way – can she be found before she too is killed?

The Headhunters by Peter Lovesey, second book DCI Hen Mallin Investigation (I haven’t read the first!)  Mallin and her team investigate the discovery of a dead body, found on the beach at Selsey. Gemma had joked about murdering her boss – and now her boss is missing.

The Vault by Peter Lovesey. I’ve read one of his Peter Diamond books before and enjoyed it. This book is the sixth book in the Peter Diamond series. A skeletal hand is unearthed in the vault under the Pump Room in Bath, England, near the site where Mary Shelley wrote Frankenstein. Then a skull is excavated. The bones came from different corpses, and one is modern.

Hotel on the Corner of Bitter and Sweet by Jamie Ford. I’d borrowed a copy of this from the library but hadn’t finished it when I had to return it. In 1986, The Panama Hotel in Seattle has been boarded up for decades, but now the new owner has made a startling discovery in the basement: personal belongings stored away by Japanese families sent to internment camps during the Second World War. The novel goes back and forth between 1986 and World War Two.

The Music Shop by Rachel Joyce, a book I’ve often wondered about reading. As the title reveals it is about Frank’s music shop, full of records, vinyl, that is. It’s set in 1988 and is a story about love and about how important music is in our lives. When Ilse asks Frank to teach her about music she is not what she seems and for Frank it opens up old wounds from his past.

13 thoughts on “Latest Additions at BooksPlease”